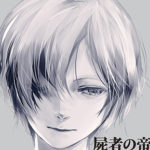 A mummy who wanders the world, trying to bring meaning to his unlife.

Mostly undead females, he is usually submissive to girls and like girls using toys on him, however he is a very powerful undead out of bed.

Lumen was an exceptionally beautiful boy whose beauty was only matched by his intelligence; on the contrary of his people he had a very pale and pure white skin, his hair was silver-white and which had made him the center of attention especially for the ones that didn’t like him for simply having a different appearance. He wanted to be a knowledgeable doctor however in the ages of pharaohs learning knowledge was not an easy thing, only important people who were from famous dynasties were allowed to learn the blessing of reading and writing. Despite being an isolationist and a shy person he had a very strong will that made him to proceed in requiring what he wanted particularly when finally fate smiled on him when he was 20, he saved the life of girl, who was bitten by a crocodile, by fighting the beast and forcing it to withdraw to the depth of Nile, for his bravery he was allowed to learn what he wanted the most by the age of 27 he was a well-respected healer and doctor. After he became rich and successful he turned his gaze on what he truly wanted, he had the desire of understanding death and darkness. He wanted to learn about them for he had always felt a kind of strange affinity for them, without a doubt he was a very kind-hearted person thus he continued his study without hurting anyone however once again he was judged and this time he was condemned to suffer the most horrifying death a human can experience, he was mummified ALIVE!
At first they cut off his tongue making him even unable to scream when they were performing the gruesome process of mummification,  then they pulled out his brain via his nostrils while he was squirming in pain, gashing the left side of his belly they disemboweled  his intestines, letting his corpse dry in slut and then they stuffed his abdomen with sand and wrapped his body with bandages. And after all this they buried him in an unknown pyramid believing that he will be forgotten in history. It is unclear what went wrong for them for he returned from death as a very powerful undead mummy. The first thing he did after returning from the dead was to take revenge, he killed all the ones that did wrong to him, but he couldn’t bring himself to destroy the whole city whose people were no better than the ones that had codenamed him to that horrible death, instead he went to the depth of the dessert, it has been unclear what he has been doing during these long years, however the cult of light that whose funder are the pharaohs  of  the old times has not giving up on hunting him and other abominations of the ancient Egypt. Today the leaders of the cult own several influential corporations through out the world, by using the incalculable profits they make they arm and train their agent allover the world to peruse and hunt down the supernaturals, despite being very possessional at what they do all the efforts they have made regarding finding the hiding places of Lumen were in vain. Many, many thing about Lumen still is shrouded with darkness making him a truly unknown mysterious creature.

Mommies are one the top undead monsters which means they have range of supernatural abilities normal undead or normal supernatural beings don’t possess some the most notable ones are:

Immortality: A mummy have an infinite lifespan which means they can be around for unlimited time.

Super strength: One the more notable features of the mummies is their supernatural arm power, they are indeed very powerful regarding raw strength certainly several times more powerful than the strongest mortals capable of tossing human being here and there as if they are nothing but light boxes.

Invulnerability to most forms of physical damages: Yes, it is nearly impossible to destroy mummies with normal factor that deal damage, bullets are totally useless and even the sharpest blades have difficulties in cutting a mummies bodies beside in case of being damaged a severed organ can be reattached very easily.

Plague bringer: Mummies can bring supernatural flesh eating illnesses upon mortals such as necrosis and etc.

Transformation: Mummies can shape shift, they can turn in to certain things like swarms of flesh eating bugs, scorpions, spiders and of-course in to a sand whirlwind.

Life absorption: A mummy can absorb the life essence of mortals rejuvenating or healing the damaged they may have received from their enemies.

Necromancy: All mummies are able to reanimate the dead, thus creating an army of skeletons and zombies, they even have the ability to bestow some magical powers to their animated dead.

Telekinesis: Mummies are bale to control or manipulate of the movements of thing, mortals and thing to some degree the bigger the thing gets the more difficult it gets to use this power.

Weaknesses: yes…yes… mummies are very powerful indeed but like many supernatural creatures they have their own weaknesses too the most important ones are:

Fire: Fire is a real nightmare for mummies it can totally destroy a mummy for it is very lethal to most kinds of undead beings.

Magic: There some incantations of white magic that would weaken and even immobilize mummies.

Holy objects: Some holy objects can deal serious damage to mummies especially if they are related to Egyptian holy gods and goddesses.

In a restored form I am a very, very appealing young man. I have silver white hair, pale white skin. In general I have exemplary appearance see the avatar.

I am a powerful mummy.