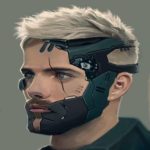 Outgoing and often times cocky, he can be a handful when he wants to be. Yet he’s a heart of gold to perhaps gain forgiveness with his short comings. Ripley believes himself to be a charmer with the ladies but of course it’s all in perspective…

– Rubbing the back of his neck during increased periods of fluster

General appearance:
At his peek height during the time he was purely human, Ripley stood at 6’2″ and was somewhat athletic. Nowadays with his body being 90% mechanical, there’s an addition to his now lanky form – 6’4″. His face is still intact to a degree though the majority of the time he keeps it hidden; a pasty 20 something with bleached blonde hair and a scar deep across the left side of his face, running under the augmentation keeping his head together. Practically a collection of carbon fibre and wires…

Ripley was born into a loving family who were all very much invested in the cybernetic augmentation that by his time had been already rooted into the world for a good few hundred years. Despite this he was hesitant of the practice – So many people had augmentation for varied reasons but along with it, to him at least, you were literally losing apart of your own humanity in doing so.

Yet in the end, here he is. A soul in the body of a machine. The short of it is he was severely in debt to some undesirables and this was the price to pay…

Now he’s a Runner, one of many in his home city. A delivery team of sorts that handle the more illegal packages and who are paid for the recovery of certain items, often times not originally belonging to the client.