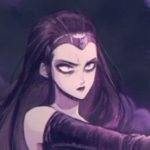 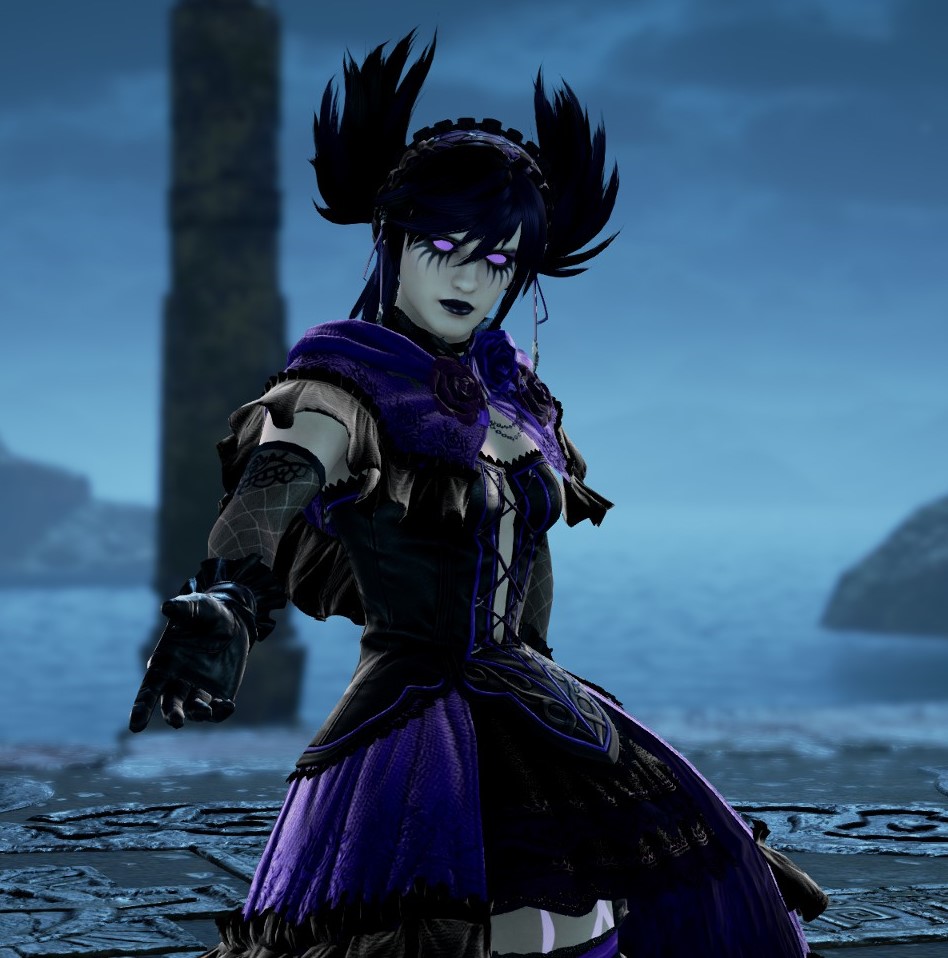 Magicia was originally known on Hellifyno as The Dreamwalker, The Nightmare Dancer, and most importantly – The Queen of Paracosm. She ruled over a crystal island of war refugees and monstrous rejects.

She also was considered the one and only Mistress of the Fwufikins hive mind – a swarm of Eldritch abominations that served as her maids.

Tales of her deeds, both villainous and heroic, have become mere whispers in the world’s lore. However, those who knew her remember that she was both a sentimental being who wished for recognition as an important figure in world politics and warfare, but a fearsome player of strategic gambles for the survival of both her and her kingdom.

Most notably was the time she briefly became The Malevolent Queen of Hellifyno. Other achievements included a powerful Tri-Conglomerate Alliance with Twine and Ar’Elis, the resurrection of the god Helvegen after he was erased from existence, plaguing the lands with living nightmares birthed from her own uncontrolled powers, and revealing the truth about Dorian Krieger, thus helping set him free from the Void.

She upholds her respect for all three Kriegers that she has been acquainted with in one form or another.

Her greatest alliance, however, is with the Valencia family. After earning Mearo Valencia’s favor, she slowly became integrated with the family, and eventually adopted into it as Mearo’s daughter. The now proclaimed Daughter of Fear would train persistently to fully grasp her powers and unlock her potential, hoping to one day become a primordial herself.

One day, a sudden attack from a deity threatened the very existence of Paracosm. As meteors started to destroy the island, Magicia was flung into the ocean, where she near drowned.

In a desperate attempt to survive, she summoned a surge of her first taste of primordial power. With that, she teleported most of her island, her people, and herself to the safety of an empty void. There they would be free to never deal with Hellifyno’s worries again.

Yet this power somehow split Magicia. While she did escape, a broken remnant of her soul sank into the ocean.

A year later, it awoke on a beach – a shadowy being with no body, name, or memories. Confused and discouraged, it started to wander Hellifyno, seeking its lost memories.

Some fateful encounters allowed her to finally regain most of her memories, including her name.

With that knowledge, she made her way to the southern ocean once more with Tsubame, whom she used to both regain the memories of what had happened to her and her island, but to get back something else as well.

Now that she has returned, she has made it clear that she wants nothing more to do with world politics or protection. Bitter and betrayed, Magicia has set her sights on her primordial training and taking her place among the Valencias. She is wary of making any new alliances – and will deeply scrutinize whatever opportunities come her way. Still, she remains sentimental. The proper offer could garner her favor.

The One Who Dances in Nightmares

None who expect her to change who she is for them

Upon birth, it was noticed that she was different from her siblings. She grew up with no interest in the dark arts, being taught them nonetheless. Compared to her family, she was dearly innocent. In fact, she was supposedly a “curse” from the gods, being an Embodiment of Innocence itself.

Her parents, ashamed as they were, pushed her to try to turn her around. Their efforts showed no reward. She was eventually given up on and cast aside, paid little heed.

An enemy of the family one day captured a preteen Magicia to bring revenge upon the Plague Magicians, not knowing that she wasn’t precious to them anymore. She was tortured continuously to the brink where she… snapped.

Suddenly, all darkness that had been taught to her lashed out at once, destroying her tormentor and all around her. These powers were unlike anything ever felt by any Plague Magician before.

However, this explosion of power destroyed Magicia. Her innocence was replaced by slight insanity, and she became nearly a walking corpse, life being supported by her magic alone.

To this day, she has spent her time using her powers not to destroy or conquer, but to instead try to find sources of survival. Her own strength became her crippling burden.

Her survival depends on stealing other life sources to use as her own. She has mastered this by entering the minds of people through their dreams and torturing them mentally. She then steals the life source and flees, making the result of her tampering a soul with a body, but no life. It cannot pass on, because the life is still being used, but the body is rotting away. It has to spend the rest of its time simply rotting and fading, damned.

She has two states of being. Her lesser state, known as ‘Dreamwalker’, makes her frail in body and mind. Her body is in a constant state of decay and tends to miss flesh in places, while she becomes a bit incoherent and starts referring to herself in a royal ‘we’.

Her stronger state (most current), known as ‘Nightmare Dancer’, her body is much more maintained and her mind is clearer, allowing for stronger and more controlled powers.

Even though she no longer has the resources she did as the Queen of Paracosm, her powers are now well developed enough where she can easily remain in her Nightmare state, with less need to feed. She has even reached the potential to unlock even greater power.

Adopted by the Primordial of Fear,  Mearo Valencia, Magicia has started to take on that family name and use it as her own. 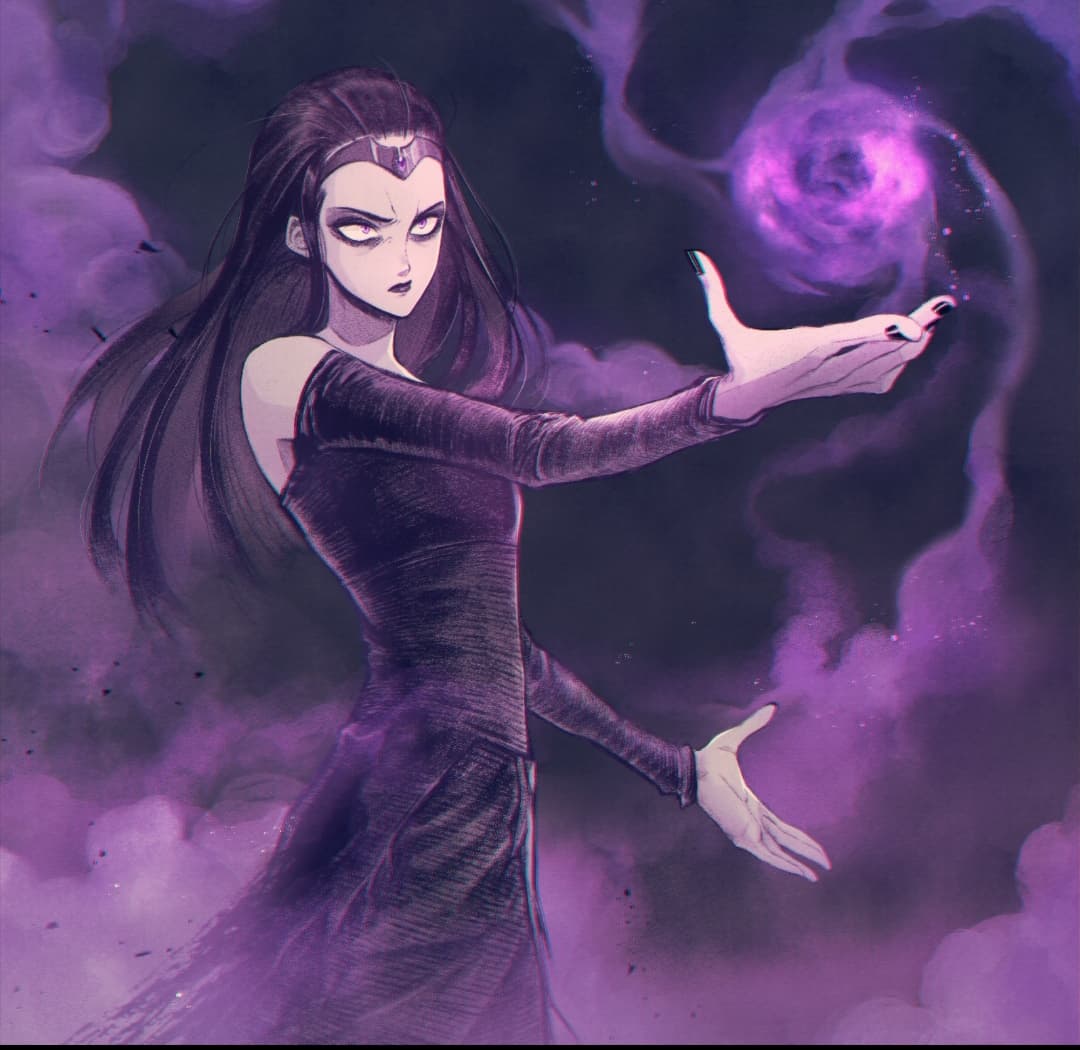 Race/Ethnicity: Supposedly Caucasian, and humanoid apart from being magical.

Skin Tone: very very pale and white. In ‘Dreamwalker’, she also has swirling gray curse marks all over her body. Flesh tends to go missing, as well.

Weight: 87 pounds. She is extremely light for her age and size, like a corpse or underfed creature, which adds to her death like appearance, ironically.

Hair: Her hair is long, to her knees. It is usually silky and soft, and the color is jet black. The length correlates with her power. Greater fluctuations of power mean longer hair, while when in ‘Dreamwalker’ state, it’s usually only to her back small. 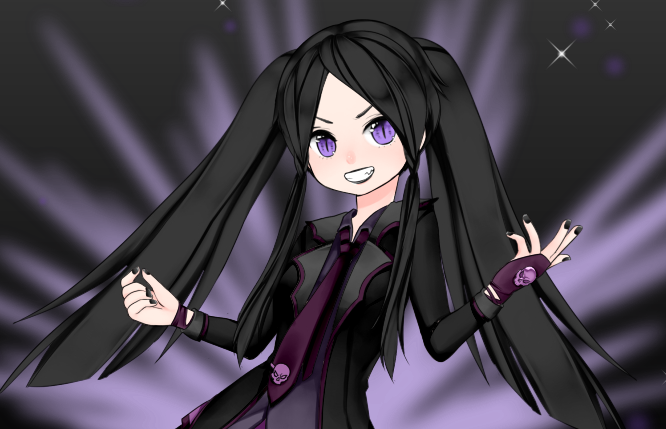 Valencia – Gray button up shirt with a black long jacket, a purple skirt, and a deep magenta tie and gloves accented with skull decals. Hair up in high pigtails or ponytail. Knee socks and black leather combat boots

Other – Black and purple lolita garb with boots, or flowing dark robes while going barefoot.

Battle Leathers  – Sleek purple and black top and pants with leather boots, along with leather straps and belts to hold her daggers and mallet. Hair tied up to be out of the way.

Dreamwalker – Long dark robes with a large hood that covers her entire face with shadow, meant to hide her degrading face and curse marks. Barefoot.

Tattoos, Piercings, Marks, Scars, etc.: Naturally dark lips. Black fingernail polish.  In ‘Dreamwalker’, dark patterns swirl all over her body, blending with scars and wherever chunks of flesh have been removed roughly. 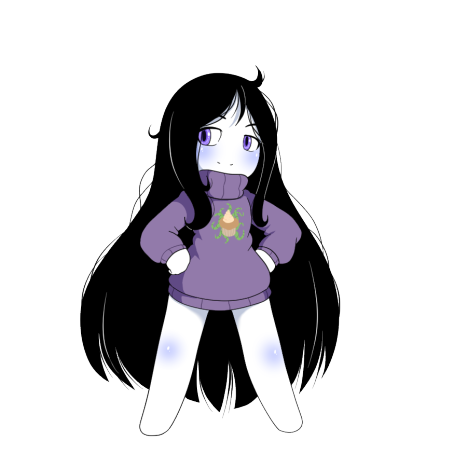 I no longer feel guilt for the sins I’ve committed.

Trying to protect this world is pointless. I will do what I must for myself.