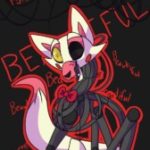 “I’ll take YOU apart and put you back together”

A take apart and put back together attraction..

Mangle is described as being a replacement for the original Foxy animatronic, due to him being deemed “too scary”. However, due to younger children taking him to pieces constantly, the staff had to constantly rebuild him. In the end, the staff got tired of putting him back together that they eventually gave up and left him as a take apart and rebuild attraction, and eventually the staff gave him the nickname of “The Mangle” and “Mangle”.

Unlike the original Foxy, Mangle’s nose has been reduced in size. The eyepatch and hook that were part of Foxy’s appearance are removed entirely for Mangle as well. Like the redesign for Bonnie, Chica, and Freddy, Mangle bears a resemblance to the look of a ventriloquist’s dummy.

She has rosy cheeks, which are hard to notice from the teaser image, as well as lipstick haphazardly dotted on her elongated snout, giving her a more clown-like appearance. Her teeth are also smaller, but her endoskeleton’s teeth are also visible. A pink bow tie is also attached to her bent chassis, and her eyes also appear to be more realistic in design than the others. She also has a second head that seems entirely endoskeleton in design, which bears her left eye on it. If looked at closely, it can be seen that Mangle has pink nail-polish on the ‘hand’ and ‘foot’.

Her costumed head also appears to be dislocated from the endoskeleton’s head, which can be seen floating alongside her. Mangle appears to have no endoskeleton torso, and she appears to be almost entirely made out of endoskeleton limbs. Wires hang from multiple parts of the body. There are also three eyes on her multiple-endoskeleton-like body to be seen when Mangle is in the Kid’s Cove.

The cause for Mangle’s severely mutilated state, as noted by Phone Guy on Night 3, is due to the exposure to toddlers, who would constantly rip him apart, piece by piece, forcing the staff to reassemble him after every shift. Eventually, the staff decided that Mangle would become a ‘take apart and put together attraction’ for the younger kids to mess around with. The result of this has since been dubbed by the staff as “The Mangle.”

Too painful to tell you..ShuT Up..

In nothing.. but pain