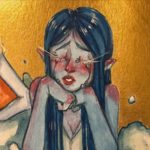 I have a lot of characters. Some of the ones I might use the most are-

For hundreds of years the light and dark elven kingdoms have been in constant war. The light elves fighting on the fields and the hermit dark kingdom sending out dragons to do there biding through a mesmeric piece of magic called the dragon stone. The Stonewall royal line has wielded this infamous stone for generations leading to there success in battle.  The light kingdom will do anything in their power to get their hands on that stone to no avail. Consequently, this led to generations of the Stonewall dynasty to grow mad and paranoid that others will find the real truth of their lines dark power. Through out the many years of war the dark elves had grown a distasteful view in the eyes of the other races, do to the Stonewall dynasty’s reputation of murderous madness, especially through the current monarch, King Brimstone. He is know to be the most vile of all. But with all this information, very little in know about this hermit kingdom, and this is why young Sadie Sparks was sent as a spy over enemy boarders to uncover the dark elven secretes and the know the where about of the dragon stone. To her surprise, in a moment of utter despair, a unassuming dark elven boy puts his life on the line in order to save her from capture. Jasper is a dark elven miner who lives at the bottom of his nations hierarchy. Practically a slave, he works long hours with little to no pay and lives in an apartment that my as well be a cardboard box. Despite being alone and in the rocks financially, being that the dark elven hierarchy system is practically rigged so that nobody can move up, he is actually very content with his humble life, happy, and (strangest of all) kind. Sadie is very shocked by Jasper’s out of place kindness that doesn’t match anything she had grown up hearing about dark elves. She starts to notice, as she spoke to him, that, as she is ignorant of his land, he is utterly ignorant of the entire world. Despite his blind trust in his nation and uncertainty of leaving the only place he has ever know and the little he had that he worked so hard for, she manages to convince him to leave with her once he helps he escape. And now the rest of it is history. So much happens after Jasper’s first step out of his secluded country and so much will happen.

I make personal art of your OCs! They are very cheap and I’m very easy to work with when creating your OC art for a profile pic or other personal use! You can review my art and contact me through Instagram @marlene_the_artist !