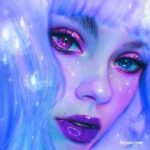 Nickname(s): Mari, Mar/Mars (only certain people get to call her this), Rin, Rina

Alias: She just goes by Marina

Hair: Silver, though, it does have a faint blue tint to it.

Overall Personality: While Marina is first quiet and observant, if one is to approach her, she is friendly and sweet. Mari has often gotten herself into trouble due to her kind/soft-hearted and caring nature as people use such to manipulate the woman. However, despite such, she still falls into the habit of trusting others – some say too easily.

The words were uttered past lips which held a smug smirk. Eyes narrowing down upon her, gazing heavily over her form.

And she wouldn’t. Their ways didn’t feel right, and she simply couldn’t act the way they wanted. They terrorized, killed and broke. She helped, nurtured and healed. They glared and spat. She smiled and waved.

Cold hearts encased in steel, they would snuffle out the life of any who dared to speak ill of their “empire”. Living with them, following their rules.. It tore and clawed at her until she was trudging through a sea of agony, pain and guilt.

Thus, why she left. A traitor in their minds, and she was. She fled in the latest time of night, hidden away and weaving down paths unknown.Surviving with close calls, held breath, and reluctant stealing. Until, one night, she stumbled upon a man.

Joel, was his name. He was cold, blunt, and a grump. But, their bond ran true, even when things grew complicated..

She remembered the night clearly, the licking of greedy flames lapping at his flailing body as he let out a scream. Marina could do nothing, northing at all. Frozen with fear and sitting tucked away in the concealing of tree, curled up high within its branches, she stared with horrified eyes.

Consequence, he had spoken whilst shoving a poorly made map into her grasp.

“Once you pass the tree-line, there’s a Tavern there.. You’ll meet people there, you’ll be safe.. Now, go, Marina – I’ll be there soon, just don’t stop and don’t look back..”