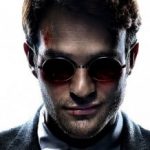 Aliases: Daredevil, The Devil of Hell’s Kitchen, Red, The Man in the Mask
Age: 28
Height: 5’11
Weight: 187lb
Occupation: Lawyer
Family: Father-Jack Murdock, DeceasedMother- Maddie Murdock, Deceased
Affiliation: Landman and Zack (previously)Nelson and Murdock (current)
Relationship Status: In a relationship
Sexuality: Bisexual
Alignment: Lawful good
Matt Murdock lived with his father, a washed-up boxer named Jack Murdock, when he was a child. Jack consistently urged his young son to study hard and make something of himself, so Matt would not end up like him. When Jack returned from boxing matches, Matt would stitch his injuries, and his father would tell him that the next match would be his to win.When he was nine years old, Matthew saved an elderly man from being hit by a truck, causing an accident. Hazardous chemicals from the flipped truck splashed on his face and as they were absorbed into his eyes, Matty was blinded. The last sight he had was of his father trying to comfort him.When He woke up in the hospital he found he could hear every sound in the nearby area something that caused him pain. His father tried desperately to comfort him, letting his son touch his face so he could recognize that it was him.Over the next few months, Murdock learned to read Braille and began to control his heightened senses.One night a few months after his accident Matt listened to one of his fathers boxing matches  on the television and was surprised when his father  won, despite the fact that the fight had been fixed against him.His father’s rebellion resulted in his death, and Matt found his body after he was stopped by a police officer in the street.When his mother failed to take care of him, Matty was moved to Saint Agnes Orphanage  While there he continued to suffer with his enhanced senses until he was visited by an old blind man named Stick. Stick knew that Murdock’s other senses had been heightened and took him under his wing and began a harsh training regime with Murdock, often pushing an emotional response from him to teach him to control his anger. Over the next few months and years, Murdock became a powerful fighter with almost complete control of his blindness. However, Matt was looking for more then a trainer. He was looking for a father, and in an act of sentiment Matt pushed Stick away and was left without a mentor.In his early Twenties Matt made it into Law school, where he met his room mate, and best friend Foggy Nelson. Matt and Foggy grew very close over the years and ended up opening their own law firm together. A firm focused on helping people and upholding justice rather then the acquisition of money and fame.