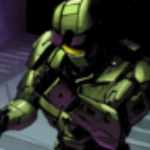 A canditade of the Spartan II program

Like his fellow Spartan recruits, Matthew was abducted at about age 6, drugged, and rushed to reach through slipspace, they were all chosen because of a set of genetic specifications chosen by the leader of the program. Dr Halsey.
The SPARTAN-II candidates, after being abducted and sedated, were taken to the colony world Reach, and began their training under Chief Petty Officer Mendez. To marginalize the civilian lives they had once led, their callsigns were a combination of their first names and numbered service tag, with second names being discarded. The SPARTANs endured a great deal of hardship during their first years of training: they were placed into situations and drills that pushed their abilities to their very limit and beyond. Their hard training was complemented with high-level education, which included mathematics, science, physics, reading, writing, and military tactics.
He taught the SPARTANs how to kill, but at the same time he taught them the difference between right and wrong. Mendez trained the SPARTAN’s until 2525 when, at the age of fourteen, they would go through the toughest part of their training: the biological augmentation procedures, which would kill 30 of the 75 conscripted children and render 12 more, who would “wash out” of the SPARTAN-II program, paralysed.
The Human-Covenant war marked a drastic change in objectives for the program; originally intended to quell rebellions, the SPARTANs were now forced into battle against a superior opponent: the Covenant. This new threat accelerated the SPARTANs’ training into its final phase: Project MJOLNIR. With the Mjolnir Armor, the SPARTANs would be the first major UNSC response to the alien threat. This proved effective, and the SPARTANs soon came to be feared by the Covenant as Demons. However. They were not immortal, and due to their already small numbers, the SPARTANs were quickly reduced in number to less than a handful. Matthew was lucky to have made it as far as the augmentation, but he soon met his end against a hail of hostile plasma fire, not one of the last surviving Spartans. After his death, he was only marked as WIA, or MIA, to maintain the illusion that Spartans cannot die.
(credit of the information on the SPARTAN-II program goes to http://halo.wikia.com/wiki/SPARTAN-II_Program) (I claim no credit for the backstory of the SPARTANs, I am just a huge fan of the halo lore/universe, and think that role-playing is a way to further my enjoyment, Matthew-106 is a character of my creation, thank you for understanding! :D, also keep in mind that I’m only human, and will have mistakes from time to time regarding lore and such. I’m no god! :))

Matthew has short brown hair, and Hazel green eyes, as well as lightly tanned skin. He, although about 15 (at the time of his death), had the body of an eighteen year old Olympic athlete, due to his augmentation. Most of the SPARTANs that survived augmentation were reported as having such physiques.