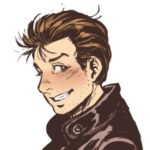 Where am I? What is this world?, these are the curious questions floating around in Max’s mind as he finds himself in an abandoned concrete building, he strokes his medium length dirty blonde hair as he tries not to let his anxiety get to him. He looks around with his blue-green eyes, stepping towards a rupture in the wall, metal pipes and concrete rubble liter around the scene. Gunfire and terrible screams resonate from the foreground, french world war one uniforms can be seen on ripped apart bodies. dirt and other sediment are thrown up by explosions. German commands can be heard in the opposite direction.

Max Frazier, 23 year old artist of the 23rd century. His ADHD and dorky personality made him a target of generic bullying in primary schooling, after graduating, he attends college and flunks out, with no money, homeless, poor social skills, and hunger he uses his painting talent to sell painting that keeps him surviving. He begins losing profit and ideas for paintings, in a desperate attempt he uses Innovation of Tomorrow’s time machine to travel through time for inspiration. He finds himself in 1915 Poland, in the middle of world war one. Max having no ability to understand this language, time, and no ability to fight, he scrambles through perils to try and stay alive.

Name: Max Frazier
Age: 23 years old
Height: 5’6 ft
Weight: 135 lbs
Hair: Dirty Blond
Eyes: Blue-green
Normally wears a black jacket with the sleeves pushed up to the elbow, the collar up, and open, with a black shirt, and black skinny jeans. His small frame and adorable look makes him look very approachable and easy to trust. His bad conversation skills and bad jokes makes it hard for him to make friends or get a girl. Being born into a large family as the youngest sibling made him jealous of the spotlight his parents put on his sisters, after moving out at 19 he couch surfed during college and still lives with a close friend while he earns minimum for his paintings.

He will probably lose whatever he had on him, carries a black wallet with his information in his back pocket.

hahahahahaha, I might have to kill you if you found out.

There is good and bad in everyone, anyone good can become bad and anyone bad can become good.