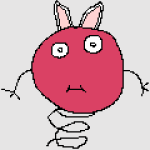 Crushes X 2. Here is a hint. They both are girls. One named Super, the other named Wonder. First names that is. Possible crush on a one named Star

From an alternate universe. Where earth and mars were both destroyed as was Krypton and Daxam. She came to the prime universe from a portal her people built to escape their fate. In her reality and timeline. The green Beetle was not B’arzz O’oomm but her instead. Calling herself the White Beetle initially and later the Green Beetle due to her habit of posseing as a Green Martian. Just like her good counterpart of the prime universe does. She at first referred to herself as the Evil Miss Martian to proclaim herself as not being good like the Miss Martian of the universe from which she has entered and now resides in. Later she dubbed herself.

The Martian Girlhunter, to seperate from Miss Martian and because the name sounded ominous. As that one human, Godfrey, had said about the Martian Manhunter’s name.

She was one of the lucky few to escape the fate of Mars from her universe and ended up in another universe reality all together. Armed with a Reach Scarab that is in offline mode. She has become a dangerous opponent to the Justice League and Young justice. Especially when she got help from Lex Luthor and the Light in undoing the “genetic damage” As she called it. What the Guardians of the Oa had done to her Martian people. Unlocking the original aspect of the Burning Martian’s DNA and removing her weakness to fire both physically and psychologically. This combined within her formidable psionic powers cause her to develop powerful pyrokinetic abilities. Her pyrokinesis gave her an edge over Miss Martian and the Martian Manhunter and combined with her Martian abilities and Reach Scarab. Made her a worthy assets to the Light and a deadly enemy to the Justice League.

Story will update as roleplays are carried out. More to cone

Behavior:: A survivor. She is willing to do anything to survive and believes the ends justify the means. While she is villainous she is capable of love and affection. Like those villains who are evil but still a loving husband/wife , loving parents, or even loving children to their parents. She acts the way she does mainly out of her fear of being alone .

The only other Martians left are her earth prime counterpart- Miss Martian and the Martian Manhunter. From whom the name she has taken to formulate her own code name as the Martian Girlhunter. While she is bad she not absolute evil. She had a policy of not hurting animals or endearing wildlife. Just like her Scarab, she refuses to deliberately harm nature and makes sites all her fight are away from woodland areas and places with animals. She only works for the Light and to some extent, Luthor, out of gratitude for helping to remove the Fire weakness that was implanted into the entire Martian species. She is one who pays her debts and she owes them for removing that one crippling weakness. She is one of the few villains who keeps their word when their word is given. She also doesn’t harm children. That was one thing she never liked about her people was the slaughtering of innocent Martian children. In some ways she is kind like Miss Martian is but in other ways she is the typical violent white Martian that her race is known to be. With her powers, she does have a very manipulative and deceptive nature but her word is still her bond. From watching classic westerns and old time mafia films. She agreed that all a man or woman has, back then, is their word. And if they are not true to their word, how could anyone expect to work with them and trust they get paid, such as their henchmen or partners. She has respect for keeping ones Word and Loyalty. IN some respect, some of her qualities are rather noble and would make her a fine superhero like Miss Martian except she enjoys being bad and doesn’t like the Be pure and good superhero lifestyle.

Miss Martian’s abilities are comparable to those of any White Martian. She has super strength comparable to that of a Kryptonian. She is invulnerable and has been shown to repel attacks from the likes of Despero. She can enhance this invulnerability by making herself super dense. This invulnerability also extends to her being able to survive in space. She is a powerful psionic with major applications of this being telepathy and telekinesis. She can use the telekinesis to fly at extremely fast speeds. This is aided by her reflexes as well and she can move at high speeds on the ground as well. She has enhanced stamina. She also has the ability to shape-shift and she can use this to regenerate herself at a rapid rate. Her shape-shifting can be used at will and in an unlimited application (she does not tire between shape-shifting.) This also extends to her being able to expand or lengthen her limbs or to create natural body weapons. This control over her molecular structure also gives her the abilities of invisibility and intangibility. She can remain invisible even to those with enhanced vision. Her telepathy is one of her strongest abilities and allows her a wide variety of abilities including creating illusions, locating other sentient beings,mental detection, controlling others minds, inducing sleep, astral travel, and transfer information to people directly, brain blast and mental shield. Her psionic abilities can also manifest themselves in a psionic blast or psionic shield. A further application of her powers is Martian vision, in which she expels energy from her eyes. She can use her lungs to store more air than usual and to expel it in a forceful blast, and can use her vocal cords to create a powerful scream. Martian’s have nine senses compared to humans, which gives them stronger perception of the world.

She gained Pyrokinesis powers after her Burning Martian DNA was unlocked by Lex Luthor and the Light.

Scarab : Green Beetle possesses a scarab that allows her a number of combat functions.

Energy blasts: The suit is capable of transforming parts of the armor into various blasting forms such as sonic waves and plasma beams.

Technology interface: The suit is capable of manipulating Reach technology upon contact, including the ability to link with other scarabs through tendrils, allowing attempts to reset or destroy the other scarab. This is not without risk, as such attempts can be resisted and even reversed.

Transformation: The suit could change into different forms, such as scythe blades and energy cannons.

Pretending to be the good Megan Morse aka Miss Martian. But she is more like the evil future version of Miss Martian then her more present, naive teenage or even, adult self.

Secretly Jealous of Miss Martian aka Megan Morse. Jealous of the lovers, teammates, and friends that she has as well as family in the form of her “Uncle John” aka the Martian Manhunter.

Secretly wants the same thing her counterpart has. A team to call her own. A friend or two. Perhaps even a mate.