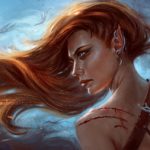 Personality:
Mercury Jones has learned to open herself up, she doesn’t keep to herself much anymore.
She has a good sense of humor and enjoys any kind of adventure you can go on. Shes not normally in  one place for long so her constant residence here is very odd.
She seems a little, well to it simply, she seems like a bitch at first glance but once you speak to and get know her you’ll that its the complete opposite.

Though, those who have crossed her in anyway knows shes a force to be reckoned with. Probably best not to cross her, or those she cares about.

A hero in the making

Growing up Mercury had an interesting life, learning hand-to-hand combat, basic to advanced hunting skills, amongst many other things with her mother at the old village. Her mother passed when she was 13 years old, She doesn’t speak much about her mother. It’s a topic very few will ever hear.
Mercury has been on her own since her mothers passing, using the skills she was taught she set off on her path. Shes a wonderer, never in one spot for too long.
At 16 she had seen an old motorcycle sitting in front of a store, clearly visible though the stores window, she saw the keys hanging from the ignition. Her eyes moved nervously to the window for a second before running to the bike, hopping on in one quick movement and turning the key all the while. The bike roared to life underneath her, she gave it some gas and the sound of the engine revving louder than she had expected. She glanced over her shoulder and she could see the middle aged gentleman pointing out the window at her and began running towards the door. In a split second she gave the bike enough juice to propel her forward; Now to learn how to ride it. She sped out of the parking lot and flew down the highway.
Moving was all she knew,
Until she appeared on Hellyfino, and stopped at the Inn for a drink.
She had seen some interesting creatures and met more interesting people when she arrived, taking notes upon notes, sketches upon sketches, of all the races, creatures, and abilities they have. After a day or so, just as she getting ready to move on to the next place, she saw a man holding a sign that read
“Hero For Hire”. Of course with her curiosity peaked she went over to speak with the man. His name was Lokkari and he had explained who he was and what the Hero’s Guild did.
She had decided to stay a night or so longer after that, contemplating the Guild. Maybe one day being known as a Hero, instead of the nameless traveler.
It wasn’t long after that, that she had sworn into the Guild and graduated. The power of Will strongly pulsing with her heart and running through her veins. Everybody has the power of Will, its learning what you can do with it. The Hero’s Guild is the only place where one can learn and master the power of Will. Although the power of Will is not the only thing taught there, there are many different wings within the Guild; Science, technology, combat, and history are to name a few. Each wing has many different rooms dedicated to certain aspects of each area.
She had gone on a month long mission, collecting the biggest payment she had received to that date. With a cigarette between her lips, she rode her motorcycle Betsy in the direction of the Guild, the one place she was able to call home. The wind whipping her hair behind her as she went, excited to see the outskirts of New Albion. The ride home was the same as always, passing through each city without a hassle.
When she was nearing the city line of New Albion something was off, like the grass and leaves were somehow tinted grey. It was impossible so she shrugged off the thought as though it was an ugly sweater. Her speed began to slow as her eyes widened. She halted the bike, her heavy leather clad boots making thuds on the ground as her jaw dropped. Her cigarette fell from her lips, landing on the pavement by her boot, her entire body in disbelief. A cloud of smoke poured from her breath as she watched what had once been her home, reduced to rubble. Some structures were still smoking, none of them fully erect. The Guild was completely destroyed.
She revved the engine on her bike before driving into the ruble reduced city. She hopped off her bike, and thank mother nature she picked up the “saddle”  bag for her motorcycle, and began digging through the ruble. She was on the hunt for anything and everything that wasn’t destroyed. Books from the library, pieces of machinery, anything. She needed it. She wasn’t letting it fall apart, but the biggest questions were; Where is the Guild Master? What happened? And why?
It had been about a month after the Guilds destruction that she had found her answer.
She had still been taking on missions for the Guild, collecting the gold to rebuild it. She was just outside of the city, resting for a moment after completing her mission. That’s when she heard it.
A loud sharp sound coming from above her caught her attention, it sounded almost like a comical sound they used in cartoons when the anvil is dropping. The sound became louder as the seconds passed causing her to look up, as her eyes hit the sky she saw what looked like a yellow pod rushing over her. Not more than 20 feet away she heard it plummet into the crust of the earth, causing an earthquake like effect. Unsure of what or who it could be she readied her sword and ran stealthily to the field where it has landed. From the tree line she watch as it opened, and her heart stopped.
There he was. Lokarri, the Guild Master.
She jumped over the fallen tree trunks she was using to shield herself and propelled herself towards the pod. The man no one could kill, was lying in weak state. Something she though could never have been done. Once he was conscious and  responsive he explained how the Guild had a connection to him. This means that when he gets hurt, a piece of the city falls.
Mercury is currently almost done rebuilding the Guild, putting her name on the list of Guild Masters proudly.

Hair Colour and Length: Firey red with natural orange highlights, falling in curls down to her midback. She normally flat irons the curls out giving her hair more length, reaching now to her hips. The only time you’ll see her wear her hair in its natural curly state is when its tied into a bun.
Eye Colour: Bright, emerald green

Attire
Casual: You can always grantee 2 items of clothing on her; Her heavy, black leather boots. She leaves them untied most days and when people mention them she always responds the same “Life is too short to worry about tying your laces. The other item, her worn out leather jacket.
With her weight and muscle increase she likes to show her curves a little more now a days. All of her jeans hugging every inch of her legs, emphasizing her hips and buttox area. Most of her shirts are either crew or v-neck tee-shirts, when the weather gets colder she obviously swaps out her tee-shirts or long sleeve shirts.
On the job: Now this depends on the job, the circumstances and the danger levels. When she’s out trying to recruit she sticks to more of a relaxed professional look, or so she calls it. She wears a pair of tight black pants, the materials ranging from leather to cloth, obvious where the two connect. The rest of her outfit is made from the same mixed materials. A long sleeve shirt with a thicker leather front and back to act as protection for the stomach, chest, shoulders and back. What looks like it was at one point a sail or a very, very weathered flag of some sort draped over her head in a hooded fashion, the only facial features that can be seen is her nose and mouth. The rest shrouded by the shadow of her worn baseball cap and the make shift hood. Her feet protected by brown leather boots that came up to her knee. When recruiting she needs to be mindful those who see her face, the guild is of much discussion in the time of its rebuild. She doesn’t need the wrong people to see her, though the Guild is yet to have created any enemies. The spirits know that can change in an instant.
Armor: Traditional armor consists of hand crafted super-metal pieces; Super-metal is as strong as titanium. When scientists were originally looking into creating a better, lighter, and stronger metal that has a strength-to-weight ratio that matches titanium alloys they had discovered their answer. Now, when trying to create this super-metal prior they had discovered that adding aluminum to the mix when creating steel could create a strong and light weight metal, but this new form was unavoidably brittle, unable to hold up the simplest of objects. Although when mixed the aluminum and iron together creating crystalline structures called B2. These B2 structures are what made it brittle. The idea was to somehow induce the formation of these B2 crystal and try to disperse them within the steel to keep its strength and to prevent it from becoming brittle. Her armour is consisted of hand designed and contrasted super-metal pieces and leather, the Guild seal her old Guild Master had given her upon her graduation was safely held within the giant buckle like holster. Large metal boots made of the same super-metal attach to the pieces on the knee of her Armour.

Weapons:
Her sword of Aeons which was gifted to her by her Guild Master upon graduation is strapped to her waist in a sheath.
A brown quiver of endless arrows with silver feathers, and a crossbow
Abilities
Attack spells:
{Lightening} Creates an arc of pure energy which leaps from finger to finger tips of caster to the target.
{Fireball} Creates a ball of fire within the palm of the casters hand, which can then be sent hurtling to your target.
{Wind} Creates a small tornado in the palm of the casters hand, able to be hurtled directly toward your target or are used in a distraction and destruction.

Physical Spells
{Teleport} Causes the caster to be teleported to a location of his/her desire so long as they can picture it.
{Physical Shield} Surrounds the caster with a protective sphere of energy that will abosrb the damage at the expense of his/hers Will until the caster ends the spell.
{Heal life} Allows the caster to trade magical energy for health. Health can also be passed on to others.