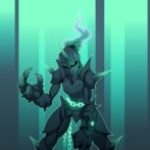 “if you should hear clanging and clanking..run..run as fast as you can…”

A monster that comes to be when demonic energy dwells within lifeless armor. In the illustration, she has the form of a half-transparent female clad in armor, but that’s only how they look to their husband. In the eyes of all other humans, they don’t look female at all, and instead they appear like an empty suit of armor moving around by itself.

If they don’t have an owner, they will attack men in pursuit of a husband in some cases, but for the most part they result from armor that continued to fight along with its owner and sought power to protect its owner, eventually becoming a monster. Being armor, the fundamental principle that guides their behavior is a willingness to risk their own life to protect their owner in the face of any danger. After becoming a monster, the durability of the armor increases to such a degree that not even a blow that could crush steel or flames hot enough to melt steel could even phase it. Besides acting as an autonomous soldier, they can also be worn by their owner like regular armor.

Once a monster has settled on a husband, her body will change to be optimal for having sex with him, but in their case, even the armor will become custom tailored to their owner and husband. A man other than their husband will never be able to wear them, but for their husband, they become the best possible armor. He won’t feel constrained, he won’t feel the weight, and no burden at all will be placed on his body.

When wearing them, one another’s bodies will join together, and spirit energy and demonic energy will mix together, resulting in a sensation as if they have become one. They will share each other’s senses, and though merely human, the husband will be able to exhibit physical abilities and sharp senses like a monster. On this occasion there is no sensation of pleasure, but they both experience an uplifting feeling of security like that of an embrace.

After a taste of that, they’ll want to be joined more deeply, and they’ll actively seek intercourse. Also, by having sex again and again and adapting to one another’s bodies, one can more deeply synchronize while wearing them, and his senses will grow keener. In short, the more one fights, the more one will end up yearning for them, and the more sex they have, the more powerful they grow. A husband and wife who copulate while fighting in the middle of battle will end up also constantly making love outside of battle.

Along with the armor, they possess a heart as solid as steel; any sort of impact or stimulus from the outside will cause no change in their expression, but they have no defense against stimulation from their husband. If their husband so desires, he can remove the armor easily, and if their husband touches their exposed insides, their mind will gleefully accept the pleasure, and their face will distort in a slovenly expression. Just like their armor, the inside of their body is optimal for receiving their husband. It feels so pleasant that even after insertion and ejaculation, he won’t feel like pulling out, and remaining joined will become a habit.

No one would try to put on a moving suit of armor, but when a living armor is lying on the ground asleep, they just look like regular armor. In the case of a person putting on the armor, if it‘s a man, then he’ll just become their owner; but if it’s a woman, unfortunately her body will be continually soaked in the demonic energy that fills the armor. At first, there will only be slight changes such as an enhanced mood and a flushing body. Usually the woman will mistake it for the thrill of battle and heat accumulated in the armor. Eventually, instead of sweat, it’ll be love juice leaking from the gaps in the armor. The woman will seek out a man as if being goaded by something, and by the time she throws off the armor to have sex, she will have completely transformed into a monster.

In nothing but death..