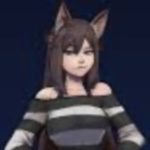 The, technical, second eldest of four. Ashlynn has a twin brother and two elder brothers. She and her family had a happy normal life until their mother died of cancer. Her and her brother were sixteen when it happened. Two years later and the twins were off to college, leaving Marcus to take care of Red since their father abandoned them to work for the military.
Ashlynn got kicked out of the college she was enrolled into due to killing her bullies. Though if she re-enrolled she would be allowed back in. But due to her knowing of not being accepted by anyone, she is now making her way through the universe to find something new. Is it love? Possibly. Friends, family, adventure? Most likely. And now, the Werewolf-Demon hybrid finds herself on Hellifyno.

Wouldn’t be secret if they were shared