Just a boy, that understands me

Taken by Jin Kazama (In my original Zafina Form doe)

Asuka Kazama (?? ?? Kazama Asuka?) is a character in the Tekken series who was first introduced in Tekken 5 and she has returned for every subsequent game in the series. While she was originally purported to be the cousin of Jin Kazama and the niece of Jun Kazama, it has later been stated by Katsuhiro Harada(see below) that their relationship is more complicated than that.

Asuka is surprisingly brash and arrogant. Although her profile states that she breaks up fights regularly, she seems to have no qualms about fighting and seemingly revels in it. In her story mode, after defeating her target, Feng Wei, she decides to remain in the tournament in order to “have fun”. Her pre and post-match quotes also demonstrate her confidence. As stated in her Tekken 5 / Dark Resurrection prologue, Asuka is also known as being a “nosy kid” who likes to solve other people’s problems, “usually by knockout”.

Asuka speaks in Kansai dialect (Kansai is a region of western Japan encompassing major cities such as Kyoto, Osaka, and Kobe).

Asuka is somehow related to Jun Kazama (Jin’s mother) and is the rival of Emilie “Lili” De Rochefort.

Ever since she was a child, Asuka received training in Kazama Style Traditional Martial Arts from her father. One day, Asuka’s father was roughed up and sent to the hospital. A police detective told Asuka the perpetrator was likely to enter the tournament, so she decided to enter as well. 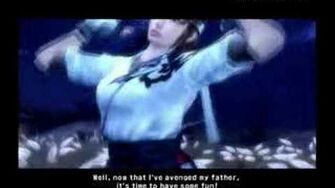 Ever since she was a child, Asuka had received training in Kazama Style Traditional Martial Arts from her father. Born with a strong sense of justice, Asuka was well known around Osaka for breaking up fights in the neighborhood.

Upon returning home one day, Asuka found pupils of her father had been roughed up. She learned from her father’s pupils that an unknown Chinese man showed up at the dojo, severely beat them, and put Asuka’s father in the hospital.

Several days later, an Interpol detective from Hong Kong came to investigate the incident, mentioning that the suspect is most likely planning to enter The King of Iron Fist Tournament. Upon hearing this, Asuka decides that she will also enter the tournament. 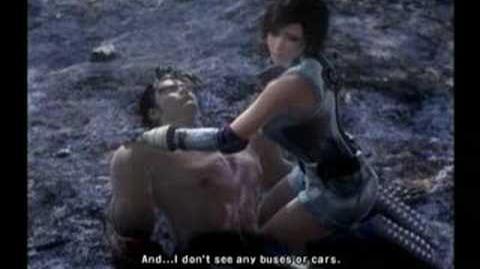 Ending Description: Asuka defeats Jinpachi Mishima, who dissolves into dust. Meanwhile, the advanced effects of Devil Jin‘s transformation disappear (the horns and wings are gone), leaving a half-transformed Jin. Asuka rushes to Jin and tries to revive him, wondering what she should do.

Though she is unaware of it, her touch undoes the final remnants of the Devil Jin transformation, and Jin awakes in his human state. Alarmed at his unfamiliar surroundings, Jin tries to stand up quickly, tripping over Asuka and landing face-first between her breasts, which make a “boing” sound. Enough time passes for a small rock to roll on the ground before Jin finally sits up. Asuka, embarrassed at first, immediately gets angry and demands Jin to explain himself. Jin, however, seems to be completely oblivious to the moment and continues to wonder where he is. Believing this to be a front, Asuka angrily power-punches Jin into a large rock, calling him a pervert and then stomping away angrily, leaving Jin asking, “What was that all about?” in utter confusion. Immediately after, a tiny rock ironically falls on top of his head and knocks him back out.

Asuka entered The King of Iron Fist Tournament 5 in order to avenge her father, who was injured by Feng Wei, but to her dismay, he was nowhere to be found, and, as the tournament ended, she returned to her calm and normal life disappointed.

However, her life didn’t stay peaceful for long, as Asuka discovered that Jin Kazama was the man responsible for the terrible war going on all over the world. She enters The King of Iron Fist Tournament 6 in order to capture Jin Kazama. 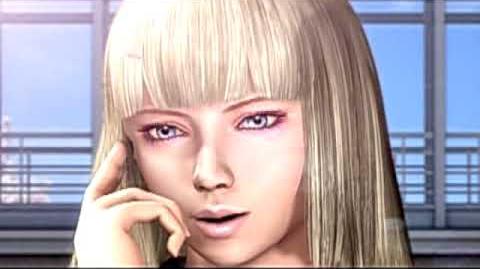 Ending Description: Asuka is hastily peddling her bike. She cries out that she’s going to be late for school. As she is about to seemingly careen into the place (which may or may not be Mishima High), Lili‘s limousine appears out of nowhere. Asuka yells in surprise, and crashes her bike, making her lunch fall to the ground. Lili gets out of the limo in her school uniform, and states that her first day at school is completely ruined. Asuka angrily yells at her, “Are you some sort of idiot?!” Then the two of them engage in a fight, exchanging powerful blows with each other. Lili’s driver quickly gets out of the limousine while this happens. 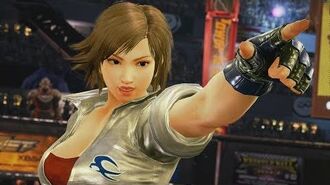 Since they first fought at the King of Iron Fist Tournament, Asuka felt that Lili was taking the whole rivalry nonsense a little too seriously. Asuka recalled Lili’s phone call out of the blue a few days earlier: “Hello, Asuka. I am sure you have heard the news that the King of Iron Fist Tournament is starting again soon. Worry not, I have already been gracious enough to register you for the competition. No trying to weasel out of it, you hear? I am ever so looking forward to fighting you.”

As Asuka let her rage toward Lili’s presumptuousness fly down the phone, Lili hung up. Fed up of being treated like a rich girl’s plaything, Asuka thought that maybe if she beat Lili, the conceited little princess would leave her alone. Then again, maybe not…

Asuka wondered how she could resolve the situation but came up with nothing. Eventually, she decided to go along with Lili’s plan and enter the tournament.

Ending Description: After defeating Lili, Asuka is shocked to find that her rival is planning on moving to her own home. As Asuka shouts at her to explain herself, Lili waltzes around saying that she will learn the Kazama Style Traditional Martial Arts and rebuild the dojo to its former glory. Asuka can only shout in protest, demanding an explanation, and chase after Lili as they leave the arena.

Asuka appeared in the crossover game Street Fighter X Tekken as a playable character, her partner is Liliand their rivals are Chun-Li and Cammy. She is referred to as the “Kansai Peacemaker” in her character description.

Asuka is featured as a playable character in Tekken Tag Tournament 2. She has her original moveset from Tekken 6 with a few new ones added and a wide range of special team alliances. 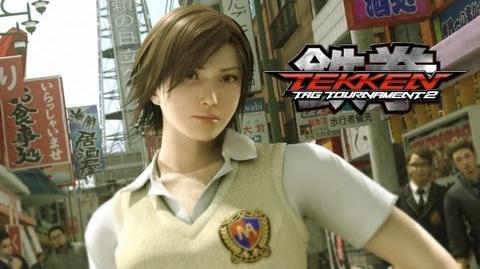 Ending Description: Two gangs are having a problem. They keep on bickering and babbling until Asuka comes and reconciles both sides of the argument. When Asuka encourages them to apologize to each other, she moves and her breasts shake accidentally. Both gangs leaders stare at them but Asuka yells at them and sends them flying. As she goes to leave, one of the members says “She is an annoying gang mediator!” When Asuka hears him, she kicks him in the face, saying “I don’t appreciate being called annoying”. She then hears another argument taking place nearby and runs to intervene while telling the gang members “Remember, make peace!” They immediately respond “Yes, ma’am!”

Asuka appears as a playable character in Tekken Card Tournament.

Asuka appears in Tekken Revolution as a playable character.

Asuka is mostly a defensive character. She has one of the best keep-out games thanks to moves like ss2, d3+4 and many more, and her f2 is one of the best whiff punishers in Tekken. She also has the best reversal (arguably) that can reverse everything except lows, elbows, knees, heads, shoulders and ‘jumping attacks’ (such as a fff3) and has a larger active window for reversal than other characters with reversals who require much better timing, such as Dragunov or Paul. On the other hand, the other characters reversals don’t leave them open for long if they miss the timing while Asuka’s reversal leaves her open for a significant amount of time if it’s poorly timed.

Her Rage Art has her performing both White Heron Dance and a Windmill Kick to knock her opponent in mid-air as Asuka rolls her right arm and immediately knocks her airborne opponent with a powerful punch before she puts both her hands on her hips afterwards.

Asuka Kazama is a Japanese teenager. She has brown eyes and short brown hair with bangs on the right side of her head. She speaks in a Kansai accent.

Asuka makes her debut appearance in Tekken 5 and she has four outfits in the game. Her hair is short and dark brown in a side-parted hairstyle with bangs at the left side of her head and brown eyes.

She wears a white short sleeved traditional Japanese shirt with black flower design at the left side of her top, black hakama with a white triangle design in side of her hakama with red linings and black, red and white in-step protectors. She also wears matching gray and white fingerless gloves with red and black knuckle guards and a white headband tied around her forehead. The outfit that she wears is her traditional Aikido uniform. In Tekken 5: Dark Resurrection, the color of her hakama is now red instead of black as the top of her outfit is retained. Both her fingerless gloves and in-step protectors became black and green and the knuckle guards are pink.

She wears a light blue collared, sleeveless zip-up jumpsuit (with black side panelling and black swallow design on the back) which is unzipped down to her torso, exposing her blue sports bra underneath. The jumpsuit is adorned with a black, two-pronged belt with green stars. On her feet, she is wearing black, blue and purple armored boots with three green stars around the cuff over dark blue and light blue ribbed, striped socks. She also wears elbow-length armored blue, light blue and gray sleeve-like gauntlets with puffy, black banded, white cuffs above her white fingerless gloves. She also equipped herself with blue knuckle guards, elbow guards as well as leg guards. This is her primary outfit throughout the series. In Dark Resurrection, this color scheme is changed to red and black.

Her third outfit is her notable appearance in every game as well as her endings in later games (though it is first seen in her prologue), is her school uniform.

She wears a yellow, sleeveless sweater with a “gakuen” emblem on her sweater over a white short sleeved, collared shirt, blue and black plaid skirt, navy blue socks and brown dress shoes. She also wears cyan, purple and white fingerless gloves with a swallow emblem in each knuckle. This outfit is later available in Tekken 5: Dark Resurrection.

Her fourth outfit has her wearing a black traditional Japanese dress with a spider web design which she wears half of its sleeves, she also has bandages on her neck and chest to cover her breasts, a dark pink obi which is tucked into her dress and a black laced ribbon tied at the side of her dress and red sandals. She also has a tattoo on her left leg with a word ??? (Ts?tenkaku) written on her inner thigh. 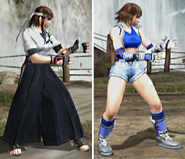 Why would I tell you that? “Oh ho ho, your gonna get hurt!”