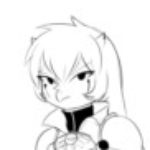 A little shy at first

Immune to:  Psychic/mental effects as a result of magic, the cold, some animal bites, mind-penetrating abilities (such as mind reading and mind control), and sexual temptation (don’t even try)

Normal: Mitch is a literal Snowy Owl (just… bigger), standing at 5’6. You can tell that she’s a female by the black bands in her plumage. She’s a good birb.

Humanoid: This one tends to draw some looks, more so than the other one. In this form, Mitch is a small, humanoid Snowy Owl. Little ear tufts poke out of her feathery hair at times, usually when she’s alert or happy. Her feet aren’t anything fancy, they’re literally bird feet. How she fits them into her shoes is beyond me. She’s powerful for someone her size, and packs a surprising punch, but she isn’t usually aggressive. She’d never want to hurt someone she deems as innocent. Otherwise, you reap what you sow. In this pic, she’s wearing her battle armour and is carrying her sword passed down by her father. 🙂

Shockwave: Mitch can charge and emit a shockwave. It ripples out at the speed of sound (it’s literally a sound wave, just much bigger), and can be pretty destructive depending on how much energy she puts into it.

NYOOM: By flapping her wings very quickly, Mitch can gain a decent speed boost while flying. She appears to suddenly speed up quite a bit, and a small thunderclap can be heard, and maybe even felt, by anyone nearby.

Icy Birb: Mitch can freeze some things upon contact with her hands, which is why she usually wears gloves so she doesn’t accidentally hurt anyone. In addition, she can throw icicles which appear in her hands, breathe icy fire, and even negate the effects of fire by blasting it with ice. If the fire comes into direct contact with her, though, that can really hurt her.

The Eyes Are the Window to the Soul: Mitch can “see” into the minds of others, knowing their thoughts at that very moment and perhaps even other things like what’s bothering them or things they fantasize about. The only catch? They have to be making eye contact with Mitch.

Telekinesis: Mitch has this ability, but can (practically) only use it on reasonably-sized objects. It takes a huge amount of focus to move large things like cars, and that’s nearly impossible in many situations. Things like regular-sized people are a little difficult, but anything smaller than a full-size car tire is easy.

Brad Tupolev: Brad Tupolev, the high priest of Gaia, creator of Unyly, and the owl who saved Hellifyno from the Void, is Mitch’s father.

Single… and please don't try to change that.

She started out as an egg in a cryopod, in the Forest of Roan, which is pretty much just a floating island of pretty nature and stuff. It’s cool. Check out the location. Her father watched her hatch, and was the first soul she ever saw. His wisdom is very important to Mitch, and he has a lot of it too. She’s now exploring this fragile planet, seeing what’s out there. She hopes to find her birth mother, who has left Hellifyno altogether. Her father doesn’t want to tell her that, though, since it would break her heart. (don’t tell her, that would make her sad :c) She was trained in armed combat as an owlet, and also picked up some skills in defending herself. Mitch knows how women are sometimes used to the advantage of men, and conducts herself accordingly. Of course, lots of men are perfectly fine, and treat women nicely. Mitch knows this. But you never know who could be sizing you up… until it’s too late.

Don’t think you can trick her easily, she sees a lot more than just your face…

Depends on the situation.

She secretly has a little crush on the actor for Hedwig from Harry Potter. He’s a male, unlike the character he played. #bringbackhedwig