active 2 weeks, 5 days ago
Base 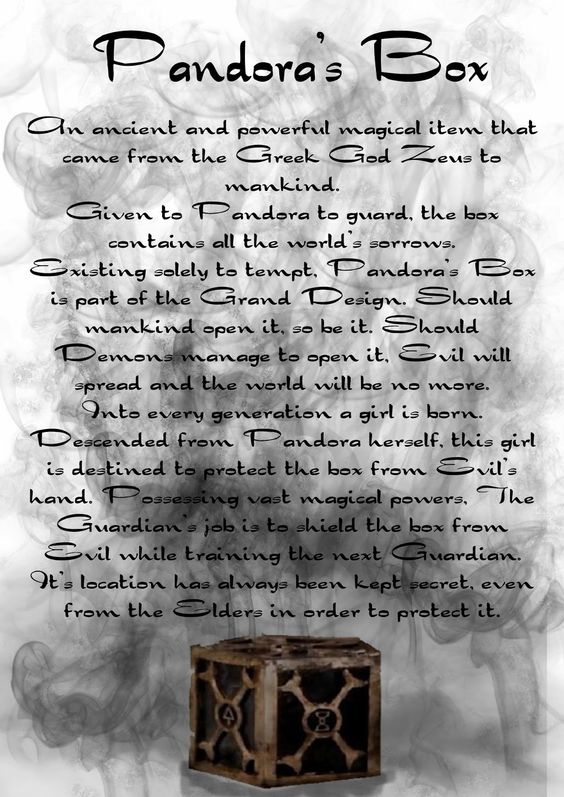 Keeper and Protector of The Box

One of Hell’s First Knights of Sins

Creation of the Greek God, Zeus

RESIDENCE – Pricey mansion in LA. And a cheap apartment in LA.

CURRENT OCCUPATIONS – Stripper/Dancer/Bartender(Entertainment at and Owner of the club the House of Eros.). Tattoo/Lingerie Model. Lead Singer of her own band called Pandora’s Box of Sins.

Keeper and protector of the Box. 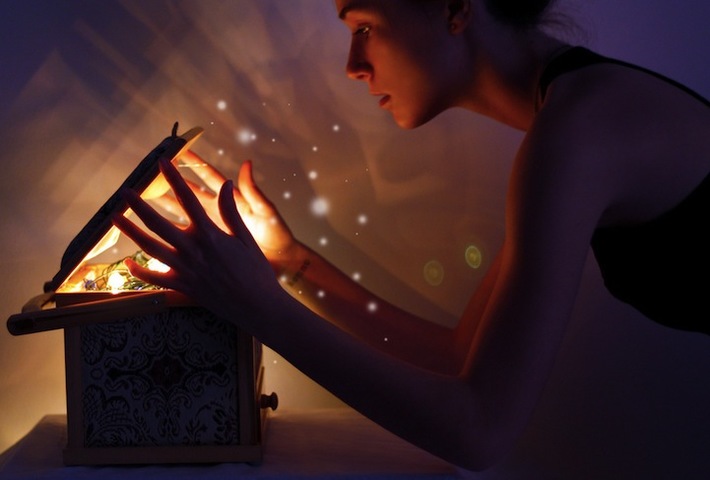 (The story of Pandora and her box comes from Ancient Greece and is very old. Because of this, there are several versions of the myth. In Greek mythology, Pandora was the first woman on Earth.)

Zeus asked Hephaestus to make a woman out of clay(Just as Man and Animal were), and he intended her to be a punishment for two humans. Brothers named Epimetheus and Prometheus. These two upset the gods and annoyed the most powerful of all Gods, Zeus, in particular… Each of the gods and goddesses gave Pandora a gift/talent of beauty, charm, music, so on and so on…but also others, like curiosity and persuasion – gifts that could be used for good or bad.

Zeus called her Pandora and sent her as a gift to Epimetheus. And although Prometheus had warned him not to accept any gifts from the gods, Epimetheus was completely charmed by the woman and thought she was so beautiful that she could never cause any harm, so he agreed to marry her. Pleased that his trap was working, Zeus gave Pandora a wedding gift of a beautiful box. There was one very important condition, however, that she must never open this box. Pandora was very curious about the contents of this object but promised that she would never open it.

But, soon, all she could think about was; what could possibly be inside the box? She didn’t understand why someone would send her a gift if she could not open it. This condition seemed to make no sense to her and she could think of nothing else but opening the box and unlocking its secrets. This was exactly what Zeus had planned.

Finally, Pandora could stand it no longer. When it was confirmed that Epimetheus was out of sight, she crept up to the box, took the huge key off the high shelf, fitted it carefully into the lock, and turned it. But, at the last moment, Pandora felt a pinch of guilt and imagined how angry her husband would be. This lead to her quickly locking the box again without opening the lid and putting the key back where she found it. She did this a few more times until, finally, she knew she had to look inside or she would go completely mad!

And so, she put the key back in and turned it. Pandora took a deep breath and closed her eyes before she would slowly lift the lid… But what she found was terrifying. No fine silks, gowns or gold bracelets and necklaces, or even piles of gold coins. Not a single item that could be held. So what did Pandora find? Out of the box poured disease and poverty. Out came misery, death, sadness – all shaped like tiny buzzing bees. These insects stung Pandora over and over again and soon enough, she slammed the lid shut. Epimetheus ran into the room to see why she was crying. Pandora could still hear a voice calling to her from the box, pleading with her to be let out.

Epimetheus agreed that nothing inside the box could be worse than the horrors that had already been released, so they opened the lid once more. All that remained in the box was Hope. It fluttered from the box like a beautiful dragonfly, touching the wounds created by the evil creatures, and healing them. Even though Pandora had released pain and suffering upon the world, she had also allowed Hope to follow them.

Years passed and Pandora died. She can’t remember how or what year it was when this happened. But she remembers being brought back. Pandora wasn’t human anymore. They call themselves demons. Strange as it was, she had come back to a much different time than she remembered. Ever since she was brought back, she made a new life for herself. The previous guardian of the box was no longer a guardian because Pandora had come back. And the long line of descendants was no more. Pandora never had children after her return. And so she is the sole protector. 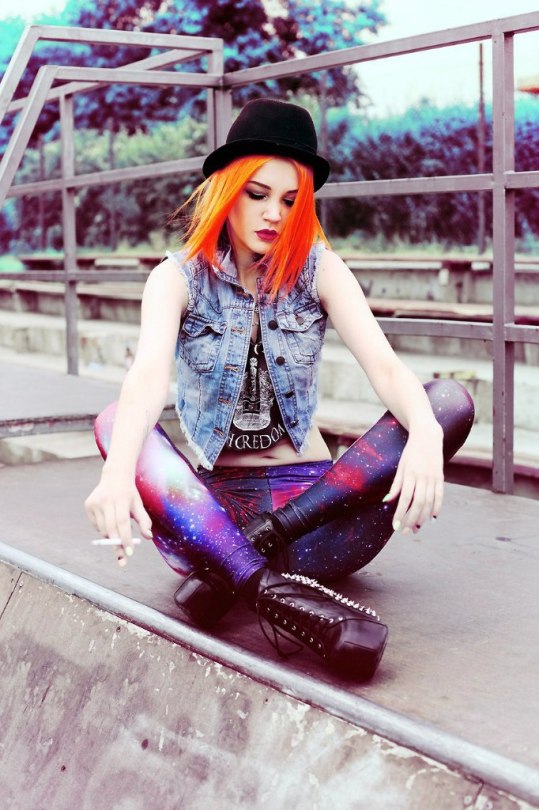 Shoulder length orange hair, eyes the color of a dull and metallic silver-blue, skin a soft pale, porcelain-like tone. She holds a slender build and stands at a height of five feet and four inches tall(5’4″.), and weighs one-hundred and thirty-seven pounds(137 lbs.). Her height is seen mostly in her legs, and her weight is quite hard to distinguish, due to her skinny features(High Metabolism.).

Her entire back is covered by a large, and very colorful oriental(Chinese) dragon tattoo and her left wrist is a tattoo of a green four-leaf clover with the word and number: Unlucky 13; traveling down her forearm, instead of across. Her right wrist harbors a tattoo of a black gear w/ the words Beautiful And Broken underneath it. On her upper right arm(right bicep.), a tattoo sleeve of different types of birds resides. Pandora’s upper left arm(left bicep), a tattoo sleeve of roses and small leaves reside. On her right inner thigh, Pandora has a tiny baby panda tattoo and on Pandora’s left inner thigh, she has a tiny tattoo of the batman emblem. Her right foot/ankle has a snake tattoo.

An extra little fact to know about Pan and her hair? The color of a bright carrot orange is her natural hair color. One strange thing that anyone would never guess about any Demon, is that Pandora has no Demon form. 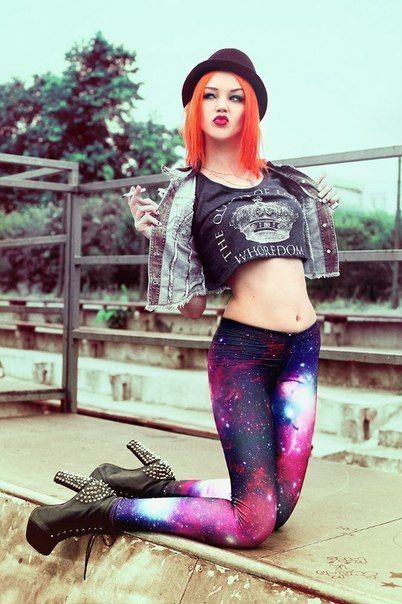 Not your everyday woman that owns a box filled with sins. But she’s still one sexy ass bitch. Don’t make her angry though. You might lose a hand….or two… Pandora does not tolerate rude, inconsiderate, and extremely annoying people.

As a huge flirt, Pandora can be a very clingy person to those she cares for. She used to desperately desire someone to love and care for her. But, nowadays, Pandora tries not to fall in love and sometimes likes to have some alone time. After her first(which was also her last) relationship went south, she didn’t want to try a second time.

She’s got a small habit of being a little…. sassy. But she does her very best not to be the kind of person that she hates. Other habits include smoking, getting tattoos, and gaining new nicknames. Whether she thinks they’re good or bad, is on her own terms. Pandora is still known to be very curious and inquisitive as if she were a child. And because she’s never gone to school, she’s not the brightest bulb in the package. However, that doesn’t make her any less of a good person. Despite being a demon, she is caring, kind, generous, protective, cheerful, and more. Demons find her to be an abomination and for that, only a select few are acquainted with her.

Pandora expresses herself, most of the time, with her hair color. Most of the time, when she feels like herself, you’ll see her with her natural orange. Others, it could be green, blue, blonde. All colors of the rainbow. Doesn’t matter.