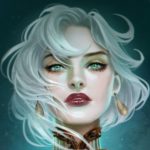 The Year is 3279 Almost 250 years after the AI Wars 100 years after the E.V.E War And the Creation of New E.D.E.N. Earth and Eden have lived in a wary peace with each other with people on both sides who wish the truce to be broken. Eden home to both digital beings and normal humans whom favor enhancement and Earth where Only humans live and Enhancements is limited to the Military and medical fields as well as  Advanced Ai is forbidden and only SDBs{Sentient Digital Beings} with special permits and permissions are allowed to visit Earth and even fewer allowed to live there. Rumors of hidden factions trying to start another war.

Earth And Orbital UEA station base

Futuristic Earth in the year of 3276. Still recovering from the destruction of the A.I and E.V.E wars but still holding strong. Creating A.I.s is outlawed because of this. And human Enhancement is limited to military use and Medical needs. Though Some minor body alterations known as  Glamors are allowed to alter hair, eye color and animated tattoos Via Nanites. Major alterations Such as Gender altering or body shape altering such as breast size or how tall/short Must be approved and often requires a medical reason to be performed. Alterations to entirely change your body to look like someone else or make yourself look entirely different from your birth appearance is Illegal.

The Echo Dimensional Eve Network or Eden Is a Large artificial planet with a massive digital network that allows both Humans and  SBDs to live and interact together by using a large network towers to transmit echos which are Holograms that can physically touch allowing SBDs to have actual bodies but still live in the digital world if they wish to not interact. Some have even take on G.H.O.S.T.s Or Global Hull Operating System Transfers. Which are full working bodies designed using special materials to perfectly emulate a human body including organs and blood though they are much more sturdy and stronger then normal human bodies. Many SBDs have taken this form and live fully among the normal humans of Eden and even started families as their bodies are full able for reproduction. This has led to children who are fully human but share some of the stronger qualities of GHOST bodies such as the stronger physical prowess or fast healing. Though they often only share one or two traits and are often weaker then the parents And only those traits pass down to future generations. Currently under the Control of Mora Omega.

The  Now {seemingly} Abandoned world of AI during the E.V.E and AI wars. Thought to be deleted after the war ended and New Eden was built an old Back up was discovered by someone whom now is the leader of an extremist faction known as the Worshipers of Emulated Virtual Environment or W.E.V.E.

The first group formed after the start of the  AI war. As AI at the time had no physical bodies, the battle field was on the digital front to prevent AIs from taking over important systems such as the market, Power system, Military system and other electronic controlled or computer regulated systems need for social and economic need. Later with development of E.V.E, Hacks members could use VR avatars to hop into the digital world and take on a more traditional battlefield to end the war. Today they rarely “fulldive” and or more a preventative system to make sure no new AI is created and any AI the government does allow does not gain enough Sentience and remains simple AI Regulatory programs This of course has breeded some tension between humans and SBDs

E.V.E became so advanced that Ai became SBDs {Sentient Digital Beings} And built technology to allow them to have robotic bodies. The tension between E.V.E and Hacks caused a new war. But because of the new robot avatars it became less a war between programers and programs on the digital scape and a much more destructive war with actual weapons became a reality. So all the nations of earth formed the United Earth Army and and specially trained Hacks members joined forces to help end the war. Today they function as a normal army to defend earth from Rogue SBDs  whom are against the the Peace as well as space station base in orbit as a border.

An extremist cult like faction that see Mora as a False god controlling the True god of the digital world. These fanatics are led by an entity known as Daios. Little is known of this leader but The faction consists of both SBDs and Fully enhanced Transhumanist Humans whom shed normal bodies for cyborg ones in hopes to reach  fully digital bodies one day.

There is an obvious hierarchy that the SBDs are treated better then the enhanced humans. And are often used a fodder in their attacks. Covering their tracks using the “flaw of the easily manipulated human mind.”  Leaving the factions to be seen as just a human cult and hiding the true intentions and the fact SBDs are pulling the strings for their own gain.

After New Eden was built the E.V.E army was formatted  to the .E.D.F robotic and human mix military. Mostly to keep the peace between humans and SBDs but also a defense against W.E.V.E. as well as they often attack the cities of Eden as well. Like the United Earth Army they are a defensive force to protect the planet.

The M.A.G.I. or Magic Access Glyph Interface. Is her magic model the twin satellites that hover beside her create large glyphs that fire AOE based magic attack while her hands cast smaller weaker “spells” using glyphs though it a her magic type the avatar itself does not use “real” magic at all but imitates the affects of magic through digital data transference Since magic is a sort of Science the avatar uses mathematical data to gain the same affect. Thus her magic attacks do not suffer from the same limits or weakness as real magic.

can change the magnitude and direction (vector) of an object to maneuver it in the desired way, regardless of preexisting vectors. This also applies to static or non-moving objects, technically speaking, the object still has momentum as it is moving through space. Since nearly everything in existence has vectors, manipulation of them can essentially grant the user an “Absolute Defense” that prevents the user from harm, among many other possibilities.

Chronolock by redirecting even teleportation vectors.

Flight by canceling the vectors of gravity or by using wind vectors as self-propulsion.

Quantum Manipulation by manipulating vectors at atomic and subatomic scale.

Space-Time Distortion by using vectors to distort the continuum.

Known as the Judiciary Universal Dominion Generated Environment . The J.U.D.G.E can create a space that allows them to manipulate what’s within the area. This can even bend reality by creating or breaking rules. Also known as Territory creation or Law creation.

As the name suggest this system is defensive and mostly used to avoid major damage if Mora is unable to counter or block it otherwise. Though she is unable to physically interact with anything while the drive is active and must wait for it to charge up once it shuts down.

offense last resort weapon. focuses on multi-verse energy of every eventuality and possibility. Choice made and not made. The drive calculates every out come of a successful attack that happens.

every universe and an alternate verse where the same person makes a differing choice for the same situation. In Mora case every alternate her that is in the same fight and makes a successful attack on the target gets added to a certain chosen number of outcomes. then each one of those universe possibilities gets pulled into a single point in the verse she is in and the target is hit with all attacks of the chosen number. IE: ten chosen= ten attacks and ten hits. this is risky. If target can control probability outcomes or manipulate thier own luck the attack can fail and reverb back at her. The drive can only be used once per every chosen number of attacks divided by half. IE: ten attack mora must wait 5 turns to use it again if needed.