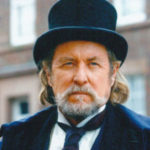 THE HOUND OF THE BASKERVILLES

“Mr. Holmes, we’ve admired you in the past, as does every Englishman. Your record as our greatest detective is known throughout the world. But this… seeing how you work… knowing that there is in England such a man as you, gives us all a sense of safety and security. God bless you, Mr. Holmes.”

Dr James Mortimer, M.R.C.S. is a British physician and client of Sherlock Holmes. After working for two years in a junior capacity at Charing Cross Hospital, he married and moved to Dartmoor to set up a country practice, where he made the acquaintance of the Baskerville family of Baskerville Hall. After the mysterious death of his close friend, Sir Charles Baskerville, Dr Mortimer sought out Sherlock Holmes’ help in protecting the only remaining heir, Henry Baskerville.
Though a man of science, he somewhat accepts the legend of the hound because of a lack of evidence to the contrary.
Mortimer is of average height and build, is an all-around nice guy and the executor of Charles’s estate. Mortimer is also a phrenology enthusiast (he is interested in the study of skulls) , and he wishes and hopes to some day have the opportunity to study Holmes’ head.

Doctor James Mortimer starts out the novel as a figment of Watson’s imagination. By looking at Doctor Mortimer’s forgotten walking stick, Watson guesses that he is a “successful elderly medical man, well-esteemed”, a “country practitioner who does a great deal of his visiting on foot”, and that he got the walking stick as a present from “the local hunt to whose members he has possibly given some surgical assistance”.

Holmes, of course, laughs at him, and points out all of the reasons that we should be able to see Doctor Mortimer for what he really is from his walking stick: “a young fellow under thirty, amiable, unambitious, absent-minded, and the possessor of a favorite dog”. When Doctor Mortimer shows up at their door with a curly-haired spaniel, he only confirms Holmes’ assessment of his character.

This early scene of deduction goes to show Holmes’ brilliance and Watson’s, well, less-than-brilliance. It also shows a common mode of characterization in this novel: Holmes’ assessment of people is always right. The whole point of Holmes’ detecting technique is that he can read people like books.

So Doctor Mortimer comes into the story mainly as a handy plot device to show how brilliant Holmes is. We know that he has this unusual habit of investigating the shapes of skulls to see what they can tell him about different people (and different races, which is the ugly side of his “scientific” practice). But beyond this weird detail of Doctor Mortimer’s interest in phrenology and physical anthropology, he’s not much of a fully rounded character.

Doctor Mortimer does provide us with lots of important information about the case. He’s the one who tells Holmes about the old family legend of the Hound of the Baskervilles, and he’s the one who brings Sir Henry to meet Holmes before they go down to Baskerville Hall together. Doctor Mortimer also happens to be riding by in his cart just as Watson needs to ask someone about a local woman with the initials “L.L.” We also see a flash of his intelligence when he figures out from examining the ashes of the late Sir Charles’ cigar that Sir Charles waited for Laura Lyons for about five or ten minutes.

Doctor Mortimer happily fills Watson in on the background of Laura Lyons, who turns out to be key to the case against Stapleton. But when Doctor Mortimer isn’t required to give us plot exposition or some comic relief about skulls, he disappears from the narrative.

(There’s a very minor linguistic joke going on here, by the way: “Mors” is the personification of Death in Roman mythology, and many Latin medical terms to do with death (rigor mortis, livor mortis, and so on) all use the sound “mort.” Doctor Mortimer’s name emphasizes his association with dead things—in his case, skulls. Hopefully not his patients.)

“If there’s to be danger, then… two guns will be better than one.”

Now, living alone in the Moor and continuing to run his medical practice, Mortimer had to go through the loss of his wife. Previous, she had been baron and unable to have children. So, currently, James is all on his own. The hound had decimated what close friends he had in the Baskervilles. The only companion he currently possesses is his dog, and he is getting up there in age. So, it is only a matter of time before the pooch passes away.

Occasionally, he does see Holmes and Watson, helping them when he can. Watson seems to need his expertise more than Sherlock, but,… assuming Sherlock sees Mortimer as a man in need of friendly companionship, he humors the notion of keeping him around from time to time.

Assumed to be a demon dog – hound from Hell. That is, until upon it’s death, it is discovered to be a perfectly mortal dog – a mix of bloodhound and mastiff, painted with phosphorus to give it a hellish appearance.

OOC NOTE – //If ever one wants the hound to actually be what is assumed of it, this will gladly be roleplayed out by me. (As in a Hell hound. I’ll even portray it as a werewolf, if one wants it to be so.) I do like the supernatural aspect of the story, and will make it truly that way if it’s requested.//

Glasses (in pocket and worn only occasionally), Gun, Pocket Watch