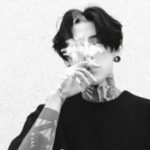 I’ve always believed in individual strength. I have since I was a boy, and I do even today. I’ve learned plenty in my 23 years of life—and one of those things happens to be the true nature of man.

Despite what many say, man is not righteous, man is a monster, though intellectually and spiritually, perhaps, more advanced, they are no different than their four legged brethren. And in that sense, man is driven by desire. Money, addiction, pleasure, all of it. Man can easily be destroyed, day at a time, until nothing is left but a husk of what once was. Man is pathetic, easily exploited; I watch every day as they writhe in their own despair like maggots just waiting for the heel of a boot.

That heel will be mine.

As a demon of wrath and sensuality, my existence is purely to make others suffer.

Anyone, I don't discriminate, as long as you don't expect loyalty.

I was born of my father’s lust and my mother’s wrath. My mother was a human, a foolish one, truly, as she sought love in my father, an incubus and demon of sensuality. Their false passion bore me, and the mere discovery of my conceiving drove him away. This sent my mother into blind bouts of rage, which pierced her womb and formed me, young, into a monster.
When I was finally born, I was only cared for enough to keep me alive. My mother found herself too fixated upon her own addictions to care for me. The memory of my father haunted her, and she saw him in me.
I learned young that the world is cruel, and I vowed to be more so. I grew up charismatic and charming, but quick to deceive, and I bent everyone to my will.
Now, I run my own business, along with the world, from underground. At only 23 years old, I’ve made millions at the expense of others.
They were weak.
This world is cruel.

I am tall, standing at 6’3, with jet black hair and soft tanned skin which is marked with various tattoos.
I have broad shoulders and a strong, defined frame of mostly lean, toned muscle. Truly a body to take pride in, which you can be certain I do.
My features are dominantly Asian, but I speak with a thick Brooklyn accent.

I am nearly always seen in a black silk tuxedo, that is, unless you get lucky. Always, on my person, I carry a knife, handgun, and a pack of cigarettes or cigars, depending on my personal mood.

I have a wide array of belongings, thanks to my fortune, and it isn’t limited to a few vehicles and a rather massive estate. I get anything I want, through money or otherwise.

The fate of man is that of lice.