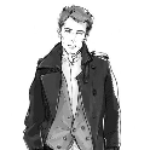 Mr. Classic is a friendly, caring guy who is not exactly what he seems. He’s an android, a war relic-now-veteran from The Old Wars, a 75 year long conflict that took too many tolls in many ways, mainly in his consciousness and in the people that suffered and killed during those times. Classic was among the first of his model/type of android to be built for the Old Wars, and is one of the last experimental units that contains an experimental self-repair system which has never stopped working and most likely never will, keeping him active and giving him a young appearance. It’s the main reason he has not deactivated or died permanently over the centuries.

Due to the fact that the self-repair units cost a small fortune not only for manufacturing but also for installation and compatibility, the units were only placed into 15 units. Classic was the third unit to receive the self repair unit along with the others. However, the whereabouts of the other 13 (he does know two are still active besides himself) are unknown to him and he can only hope that someday he’d find them. After the war was completed, with both sides coming to a draw when the entire North Eastern section of Africa was almost evaporated with a new type of tech. There was a time of peace for about 5 years, trying to allow everyone to rebuild. But some didn’t appreciate this, and so the war restarted once again after a series of terrorist attacks who claimed to be coming from both sides. The war continued on for another 12 years (leading up to a total of 75 years in warfare), ending in a final blow to both sides, causing the world to be left in rumble and destruction. Both sides came to a mutual agreement that if this were to continue, no one would be alive anymore within the next 50 years, and so, the war came to stop. The terrorist groups re-emerged once again, online to be met harshly with resistance from a combination of both sides which crushed the terrorist group named Maskers.

After the war, Classic and any remaining soldiers and android went back to try and fit in with normal life, either staying in touch or disappearing completely. No one was ever the same after those 75 years, including Classic, who developed a violent type of PTSD due to a small error in his memory systems. Skip ahead a few decades, androids began to die off and deactivate due to the lack of maintenance. Of course, veterans began to die off as well due to age and injuries. However, Classic and the other androids began to learn about a secret government task force called RUST (Recalling Units with Strategy and Tactics) that had been formed to personally hunt down and deactivate or recall any Old War android for scrapping or repurposing. The billions of androids produced for the war began to quickly disappear, as Rust took Old War tech and simply boosted and created it to become much more efficient, making it much deadlier than the tech the androids possessed. Nearly a century later, Classic had outlasted the last members of RUST and watched it be dismantled after they believed their mission was complete. It was not, as he and plenty of others still remained active. But over the next few years, because of the creation of RUST, many androids began to turn off their location chips (used during the war to find the bodies of damaged and deactivated androids so as their tech didn’t fall completely into enemy hands.), and Classic could no longer tell if they simply went into hiding or simply just stopped.

Around the time when he had been active for 330 years, his world began to finally suffer the long term consequences of the Old Wars. Old tech and radiation hadn’t quite been so easily disposed of, leading to huge environmental damages occurring. The Earth’s crust began to soften in spots where major bombings had occured, leading to volcanic eruptions and massive sinkholes. The world was literally falling apart. In order to save people from this fate, experiments were performed, including interdimensional travel through the use of an Old War experiment called Operation Allies 02, an experiment focused on recruiting people from other Earths in order to help fight through the use of portals. It was never truly successful, as everyone that went into said portals never came back. Classic participated in this new interdimensional travel experiment, and found that it worked. Except he couldn’t tell them or find a way back to let them know it worked, which explained the reason why the Old Wars experiment never had anyone come back. They figured out a way over, just not a way back. Of course, the other android’s that still were active during this also participated in the experiment, each winding up on the same Earth, just in various locations.

Various medical equipment, which the self-repair system replenishes over time(Ranges from baby formula to adrenaline to gauze bandages to any blood type)