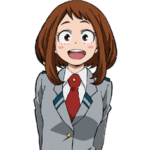 Coming from a poor household, Ochaco becomes easily excited or surprised over little things, even losing her composure when faced with actual luxury, to the point of nearly fainting. Bonus materials have depicted her as frugal and occasional stingy, since she goes to extreme lengths to save money, including sleeping so she doesn’t waste oxygen or skipping meals in order to save food. Ochaco’s parents are her main drive to becoming a hero, and she desires above all else to earn money in order to give them a comfortable life. She is brazenly honest about her priorities and doesn’t hide her pursuit of heroism being in large part due to money, despite her embarrassment over admitting so. While money was a deciding factor in her decision to become a hero, Ochaco dreamed of becoming one prior to realizing the extent of her parent’s monetary struggles, as she admired their capacity to bring smiles to people’s faces.

In terms of heroism, Ochaco has shown more preference towards rescue, being a fan of Thirteen for their expertise in the area. She is aware of her physical limitations, deciding to choose the combat-oriented hero Gunhead for her internship in order to increase her fighting repertoire. Consequently, Ochaco developed a new sense of battle awareness and has become a more instinctive fighter.

Ochaco is a short girl of slender yet feminine build. She is fair-skinned with a perpetual blush on her cheeks. Her eyes are large and round, their irises a warm brown, with rather thick upper eyelashes, two longer and more prominent ones protruding outwards on either side and fewer but more individually pronounced lower eyelashes. Shoulder-length and about the same color as her eyes, her hair is bobbed and curved inwards at the ends, two longer clumps taking the same shape on either side of her face, and short bangs that reach roughly a quarter of the way down her forehead. On the top inner segment of each of her fingers, she has a small pink pad, somewhat resembling the toe of a cat or a dog’s paw, which she uses when activating and deactivating her  Quirk