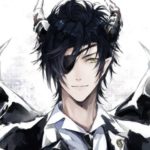 Nexus F. Luciferson, Lucifer’s fourth eldest son. He was raised both on Earth and in Hell, he switched between the two every six years. It was like this because his mother was an immortal human. She was cursed with this immortality when she fell in love with Lucifer. While Nexus’ mother taught him: manners, magic, gardening and the care of animals. His father taught him: fighting, strategy, deal making, possession and torture. Once he became nineteen his full powers developed, revealing him to be one of the strongest offspring Lucifer had ever conceived. Due to Nexus’ power, his father loved him and acknowledged him more than his other living half-siblings. Causing them to hate, envy and attempt to kill him on occasion and they still try killing him to this day. He is closest to his elder brother and sister, Nero and Zero. They are the nicest and are nearly as powerful as himself. Skip to a thousand years after his nineteenth birthday. Nexus’ was the reason and spark to one of the largest Angel v Demon wars in history. It is known as The Unholy War. It was called that due to Hell winning and all the sin the demons influenced the mortals to do during this long period of one hundred years. Skip to today, three thousand years after The Unholy War. Nexus is roaming about Hellifnyo to appease his curiosity, boredom and secretly his loneliness..Those who goes near him, be wary. For he is dangerous, unstable and very much a sadist. Unless you befriend him then that’s a totally different story..

Head: Black, slightly messy, short hair which is long in the back (goes down to shoulders in the back) .Jet black horns that have grown from the sides of his head two inches above his ears. They are large in width and are curved, the points of them facing forward.

Face: Golden yellow eyes that have slit pupils (as do most demons). The right side of his face is covered in jet black scales (it only reaches from the top of his forehead to two inches above his mouth). His teeth are normal, except for his canines, which are like vampire fangs.

Body: He is of an average masculine build (meaning slightly muscular). He is a height of 6’2. A tail (one that you would imagine on a stereotypical demon) grows from the bottom of his spine, it’s long enough to just nearly miss touching the floor. His tail is covered in jet black scales, and the tip of his tail is golden yellow, like his eyes.

Clothes: He wears a maroon red button up shirt. A dark blue tie and a dark blue sleeveless suit jacket. His bottoms are dark brown khaki dress pants and his shoes are dark blue dress shoes.

That all shall fear and respect me. For I am powerful, and I can do everything at once if I would wish..