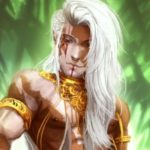 active 3 months ago
Base

Like a normal texas rat snake, the tail of this naga is a yellowish-brown with brown splotches. Though due to his vitiligo portions of his tail are a pearlescent white. The tail of this male extents to ten to eleven feet, so he could easily coil around his prey if he so wishes.

Due to being a naga texas rat snake variation, his meal consists of rodents and avian creatures. Just his preferred palate and what his stomach mostly accepts.

When he feels threatened, his tail will vibrate. He’ll try to hide and be stealthy. And even to intimidate what he felt threatened by, his vibrating tail against the brush and leaves will mimic the sound of a fairly loom large rattlesnake.

Due to being the type of naga he is, he prefers stealth over most variations of hunting prey. He’ll hide in bushes, keeping low to the ground. Or climb up trees as to get his aviary snack. Although if a major threat presents itself, he’ll pull out his claws or dual blades and attack with speed, agility and coordination. As he’s fought with those twins his entire lifespan.

"Anyone to catch my eye, I suppose. Though there isn't anyone as of now."

He doesn’t hold much on him, not even much clothing as he has no real need for it. Though adorning his neck is a golden necklace that shimmers in the light against his differently colored skin. Its base holds onto his neck like a choker while a lacelike design falls from it to cover his clavicle and lower neck. Adorning his upper arms, just below his shoulders, are arm bands made out of gold that hold circular decoration of the carved out gold of the pieces.

At his hips is a belt satchel. One satchel on each side of his hip along with a sheath on each side for his dual blades in which he had found in an abandoned campsite within his forest. It’s a cattle brown so it’s seen easily at the whitened base of his tail. Though what are within those satchels? Coin, shiny rocks, smaller rodents to snack upon when hungry, and herbs to put against wounds to help the healing or to cease infection.