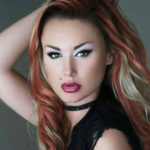 Nestled in the rolling countryside, many miles outside the city, The Absolute had not been this busy for a long time. The building was right off the ‘main road’ but out here even the main roads were counted by country miles. The large plantation farm a few miles up the road was hosting a horse show and Shade could have rode down there and kissed them for it. People had been trickling in all day, some looking for a place to stay for the weekend, some just looking for a place they can let their horses out to graze. Bottom line is that she was going to be able to keep this place stocked for another six months at least on the money she would make this weekend. Thank the Goddess cause after the cost of her new favorite addition the sunroom, she was worried she wouldn’t be able to afford to feed her horses. Nevermind herself.
This all of course meant she was busier than a one-eyed cat watching two mouse holes. Which speaking of, where had that fat ass farm cat gotten too? Probably hiding out under the back porch pissed that there were so many strangers were in her sanctuary.
Shade didn’t have time to worry about the damn cat. She was starting to internally panic she did not know what she was going to feed these people. The Tavern had not employed another person besides herself in almost more than a year and she was the equivalent to the anti- Betty Crocker in the kitchen, it was a wonder she fed herself, though her diet of coffee, herbal teas and fresh fruit seemed to be keeping her going just fine. Thankfully she had been prepared enough to call Matt, her fruit guy, and have him bring out extra with his deliveries this week. Assorted Fruit- on the house. She may not have been able to cook but she could make a mean cocktail, perhaps she could just keep them all so drunk they wouldn’t be hungry. That seemed like a solid plan.
But it was only Friday afternoon; perhaps she can talk her patrons into lighting up the grill and opening up the kitchen for them to have a ‘potluck’ style meal or two. Yeah there was a reason she couldn’t bring herself to call the place a B&B. Unless it stood for Bed & Beer that is.
Summer time had brought some steadier days . While School was still out, the neighboring small towns were full of bored teenagers who came out to drink coffee or take advantage of the walking trails that went to the river behind on the property to make out, get high and go swimming. They had a deal she would let them be as long as the area stayed in pristine condition. She didn’t mind giving them as place to escape but she would be damned if they trashed the joint. Luckily the teenagers around here were not so bad, country state of mind and all.
Then there was the townsmen that spent most of their afternoons fishing in one of the property’s well stocked ponds then taking a stool at the bar and steadily drinking an impressive amount of whiskey. At least until their wives had to be called to pick them up because the dirty innuendos of flirtation they used on Nandina were so slurred they all sounded like they had mouths full of marbles.
Then there were the rich lot from the wine country town who were always willing to spend a pretty penny or two for riding lessons for their children on the horses they also boarded on the property or one of the Absolutes few. Those yuppies brought in the bulk on the income around here but they were certainly a bigger pain in the ass too. She always found herself sighing a little relief when some of those little snots got sent back to whatever expensive boarding school mummy and daddy had them locked away in.

A deep sigh escaped those plush, crimson stained lips causing one of those red curls that had escaped the messy up-do to bounce off her cheek. She slid the draft beers she had just poured for Mr. and Mrs. Holly across the polished wood bar top with a stunning smile that could light up Vegas for a night. A couple reeking of money but who seemed excited to stay in such a ‘rustic location’ for the weekend.
Rustic indeed, Shade thought. Hell, the only reason the grand, 8 bedroom house was in any sort of receiving order was because Shade had been living here since leaving her husband and the girl needed something to occupy her mind and body or she got restless… and that never ended well. So she kept herself very busy keeping stalls mucked, weeds pulled and floors swept. She was lucky she had worked for the actual owner for so many years before that he trusted the place in her care. Though the funding was limited.

The evening finally came and the tavern had the hush of night fall over it. She sat out in the sunroom doing the books from today. She was in her favorite chair letting the coo of all the nighttime animals and critters play her their song through the open screen windows. Her long legs bare and crossed. She shivered a little. She should have changed from her shorts into leggings before settling out here. It was the time of year where it was always a cool evening and morning with the oncoming Autumn season but by two pm you were reminded that Summer had not yet released it’s hold.  A steaming mug of herbal tea sat on the small table beside her. Usually by this hour she was half a bottle of whiskey in trying to drown out her inner demons, and maybe a few real ones as well. But since she really didn’t want to tend to a full tavern hung over she chose a more mellow night cap.