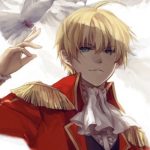 I am Nero Claudius Caesar Augustus Germanicus! However, I shall allow you to simply refer to me as Nero for the sake of brevity.

"I love all of those, whom I deem beautiful. Some are beautiful in body, others in their spirits or their minds. Regardless, it is beauty that attracts me the most. Though, if I were to find someone whose beauty rivaled even mine, then I suppose I might consider falling in love."

“My heart is as free as the wind!”

[I’m currently rewriting this, since I lost all my stuff after the site relaunched]

Nero’s hair is a golden blond, and his eyes are of a weak green colour and although Nero is physically well built, he is a bit on the shorter side when it comes to height. Nero generally wears his regalia,

His sword, Aestus Estus. Roughly translates to “The Primordial Sword” . A rather flashy (maybe even gaudy) looking curved longsword rumoured to have been blessed my Mars. The sword can be ignited if it is imbued with mana, though that isn’t actually that useful in combat. It’s mostly used for lifting morale or inciting fear. It is essentially indestructible but has no other distinguishing factors besides that. Well, except for it’s looks. Nero likes to boast about the fact that it was crafted using pieces from a meteorite.

Royal regalia:  The clothing he wears most of the time. It was made during his reign and was designed to combine the comfort and flashiness of the emperors usual attire with the safety provided by armour.  Appearance wise, it resembles a red mess dress with white accents and gold trimming.

Nero is rather self-conscious about his height, though he’ll never actually admit it.”My height? What of it? It doesn’t bother me, so why should it bother you?”

Nero is also rather paranoid about drinking or eating food or drink offered to him by others. He’ll even reject wine if it’s offered by others. Due to this, he always had someone taste his food for poison when he reigned. Nero also exhibits paranoid traits at other times. If he’s ever asked about it, he’ll usually either say that he’s simply being careful or he’ll feign ignorance.

”Oh, food? Thank you, but I’ve already eaten, so I’d rather not have any.”

Nero suffers from period migraines. It varies but at worst, they may be daily, and they’ll occur once a month at best. This is easily his greatest weakness and makes things like combat or anything physically taxing next to impossible. It can even make something simple like reading or listening to music cumbersome. Nero does however,  have ways of lessening its effects. Usually drinking or sex… Or both… Even still, these are only temporary, and even drinking has its drawbacks.

Last but not least, there’s Nero’s immortality. Well, it wouldn’t really be fair to call it that. It’s more like a contract that doesn’t allow him to age.  To explain it briefly, the contract was formed between him and Poppaea at the moment of her death. Although the contract was made by accident, it still functions like a proper one, although its terms and conditions are of a much higher level of power in comparison to any type of traditional thaumaturgical contract.The terms are as follows:

The contract signer [Nero, in this case] cannot and will not age until they are able to fulfil their end of the contract. Additionally, the signer’s physical body is changed back to that of the signer’s body when their body was at its physical prime. Any further muscular or physical development will be reversed.During this time, a B rank, passive self-regenerative will be cast upon the signer. The Mana for this curse will be supplied by the signer. The signer will not be able to deplete their Mana supply to such an extent, that the self-regeneration curse is no longer able to be used. If the signer attempts to repeatedly deplete their mana supply beyond this point, a rebound effect will trigger.The signer is no longer able to learn new types of magic, although the becoming more proficient at using already learned types of magecraft or refining said magic is possible.If the signer engages in activities that serve to hinder or oppose the completion of their contract, a rebound effect will trigger occur.[There’s more to the contract, but I’ve decided not to disclose them for spoilerific reasons.]

That it is a king's responsibility to protect his people.