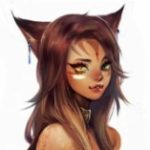 Aphrodite is Nicheya, an ancient race of hybrid cat people that originate in Kaliskel.

Aphrodite was one of four siblings. Her brother Alacai was the oldest, Aphrodite came next, Kamil after, and the youngest sibling, her brother Jordan. As a young age, the siblings mother, Aniya, taught them the dangers, the joys, and the rules of the realm they came from, a place filled with nature and other beings like them called Kaliskel. The one thing Aniya made sure to drill into their heads was they could trust noone, not even family. Each nicheya, or werecat, was given a test on their age day. When the time came, the siblings were thrust into the wilds of Kaliskel, and pitted against eachother. Forced to kill her siblings, Aphrodite now searches for a way to avenge them. Moving from world to world in search of a magical dragon called the Ishita, looking to hopefully get on its good side. But after this happens Aphrodite must kill Ishita, and absorb its galaxy like wings according to legend.

Aphrodite, like all other Nicheya, has an animal form. She is able to switch to this form whenever she likes, by way of light.

Aphrodite also has an obsession with feathers, coffee, and dogs. Despite being a feline, she cant contain herself around canines and always must pet them.

Nicheya are also warriors who are fierce and determined in battle. When in combat, Aphrodite can keep a cool head, even when she is being beaten to a pulp. Never before has she lost her cool, or control of her anger, and in a fight she assesses, and then acts.

When it comes to love, Nicheya usually have no choice. From the start a mate is chosen for them. Now not in Kaliskel, and the last of the Nicheya, Aphrodite does not know how to choose a future mate.

The nicheya also have a separate language, but Aphrodite only remembers some after crossing the barrier of briards. The following are words she will commonly use,

Lishwin – a common curse, translated into English roughly meaning “christ,”
Diampidine – a battle cry, or angry yell this can be roughly translated in English to mean “i conquer,”
Calimem – a common word of joy. No translation but if its said, pet her ears.

Ripleki – ripleki are a race of dream spirits, with long claws, on their hands and feet, and bony, spiny limbs, with wiry hair and a scarred face. Without eyes, and with wings, they are fearsome creatures who pray on cubling Nicheyas. At a young age all Nicheya are taught to cower before these beings. If Aphrodite says this around you, she is scared.

Aphrodite, unlike other felines, happens to like water. She grew up around a swim hole in Kaliskel and mornings there are some of her only memories. She is afraid of the dark, Ripleki, amd thunder.

To calm her down, her ears must be sifted between fingertips, and coo’d words of usual nonsense help as well.

Aphrodite has never had a home since being in the human realm. She hasnt had affection, or love, and she yearns for it, day and night, after being ripped away from Kaliskel.

Aphrodite stands at a mere 4’8 when in her human form. Her hair matches the color of her amber fur when in cat form, and falls to the arch, or small, of her back, with natural highlights.

When in human form, her skin is covered with a thin layer of fur, that looks like her skin, with light, and dark, colored markings in various places on her body.

Her eyes are heterochromatic, or ‘bicolored,’ her left being a bright cats eye green, and her right a pale yellow.

When in human form, several characteristics of her animal form carry over, such as the amber ears and tail, her sharp canines, her catlike nose, and sharp, wickedly sharp claws where her nails would be.

Most commonly when seen in her human form, Aphrodite will be wearing apparel true to her Nicheya roots. A red cloth wrapped around her breasts, and a matching short skirt.As well as vine like jewelry on her ankles, and a single earring made of the rock she ripped from her mothers flesh, as well as a black silk collar with a bell, and a small metal plate on it, depicting a dragon, as well as her name.

When in her cat form, Aphrodite is no bigger than a kitten. With thick, fluffy amber and beige colored fur, and her usual eyes, and of course her collar.

A single shard of rock, taken from her mother when Aphrodite fled Kaliskel.

Well, quite obviously my secrets.

That fate is a sham created by assholes who couldnt think for themselves. (Dont quote me on that)