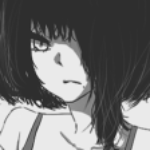 A pureblooded werewolf, he left his tribe to roam the world around 14. He has a silver ring he keeps on a chain that houses his ancestor Silvette, one of the first werewolves. At times Silvette will posses Nico, which continuously annoys him. When possessed, Nico’s eyes will become gold.

Is deathly afraid of Jen, who gave him the burn scar that now wraps around his neck.

Pale skin and piercing green eyes usually hidden by long ebony black hair, he looks rather feminine. A tall and lean he, seems more cat like than wolf. A small beauty mark is under his lip and a burn scar wraps around his neck.

– One silver ring on a chain housing the soul of an ancient wherewolf.

The existance of his ancestor.

Fighting should be used as a last resort, that means try to run first.