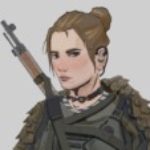 The Northwind Group (NWG) is a paramilitary organisation based out of the De-Facto capital city of Hellifyno, Consequence, on the planet’s most northern continent. Supposedly. Not much is known about the organisation, but they appear to be fairly small, with very limited armour and air capability. However, it is believed that they have a benefactor within the Consequence government, and as a result of this rumour, additional unconfirmed reports have spread that they operate outside of the law. Though they have seen no legal investigation, up to this point.