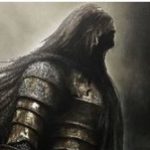 Nostlas of  Vinceru. Gold and pearl and glistening silver. A diadem of honor, a halo of justice.

A servant of deific beings, upon the plane material he walked, where once he walked amid perfection. Fields of grain and white-tipped mountains, rivers, and streams clean of any impurities. Yet One asked of him a favor, for He had made a new creature; man. Among them, he watched from afar, never intervening. Shaped in the guise of Him, they grew. Wisdom came along with fire and the meat of animals. They continued and made things of mud and straw, and of rock and obsidian.

Man was come, and soon Nostlas knew he would be returned to great Celestia.

Yet… His eons brethren sought these new folk, and sequester them they did. Through golden tongue and honeyed words, those who reek of sulfur spilled promises upon their ears and blackened their hearts.

The people split and became two tribes. From those aroused by the promise of secrets and lies, they took sharpened bone and rock and pointed wood, and blood fell of their kind.

Nostlas appeared to them, knowing well He would want his servant to quell this treachery. The eyes of man had never before seen such perfection. It gave their meager minds knowledge of something greater than them.

It was not what He wanted. Forever were their thoughts changed by this act, and for that, Nostlas would be punished.

Far beyond reality, sight or possibility was he secreted away, governed over by his preternatural cousins within the hells; those who had once been as he, but the schism of that long ago era had separated them, much as the men he was being punished for separated themselves.

Untold millennia crept by, though to Nostlas it was but a day. Sealed in Haephadran’s Chains, he knew naught of the world above, for in the thousand infinities of the Hells, there was only silence. Haephadran’s Chains were a crystalline prison, and no light nor noise nor thoughts breached their amber hued exterior.

Yet… something happened. Unbeknownst to Nostlas, the chaos of above was disturbed by the bombing of a prime material gate to the hells, and the eons of entropy that was his oubliette within the depths had eroded his chains. Scant layer by layer. The trembling, the tremors and feedback of the portal’s bombing had sent splintering fingers of aftershocks deep into the gut of Hell.

The Chains fell away, and Nostlas found himself within Bellenfaust.

Thoughts told him to escape, and wither unto death trying, by flaming sword and burning bright halo, he would slay the devils and demons that surrounded him…

…but, they paid him no heed. For, though his thoughts hadn’t entirely changed, his presence within those bowels had changed him. No more was he a radiant creature of the Heavens.

He was Nostlas of Bellenfaust, and none therein could withstand his primordial might as he tore the life from Bhajarka, the then ruler of Bellenfaust.

He would learn of this world through the eyes of a being now made manifest of concordant dichotomy.