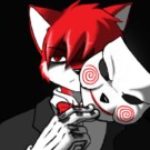 Thomas Kramer was born in a rich abusive household and everyday was beaten by his parents..his grandfather was the only one who didn’t hit him his grandfather was known for creating twisted and vicious looking torture devices which were quite popular with prisons and government agencies..he taught Thomas everything about the creation and usage of the devices..Thomas soon respected and admired his grandfather cause of his intelligence and creativity of the devices..a few years later he started to date two foxes both were different colors but he loved them both and soon started to date the two of them..

Various torture devices he made

Notebook filled with ideas for torture devices and machines

file:///storage/emulated/0/Download/DY8NZpvXcAEf1xv.jpgHe’s loyal to his boyfriends