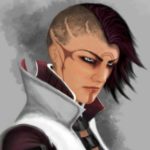 Orelia was ‘born’ on the ice world of Noveria in the Milky Way galaxy, in a lab deep under the ice by the Noveria Development Corporation. A project funded by her ‘grandmother’, the Asari gang-leader of Omega, Aria T’loak.

Aria started the project to not only create a clone of her daughter, Liselle T’loak (Orelia’s ‘mother’), but push the boundaries of genetic science itself. The clone that was created was a breakthrough – a human clone made from Asari DNA. The NDC had done something that – at the time – was considered all but impossible.

Once Orelia was old enough to stand, she began her training under the supervision of former Asari Commandos – her training regiment was as brutal as it could be; Aria didn’t want a ‘granddaughter’, she wanted another weapon in her arsenal. And Orelia eventually delivered.

She was moved from Noveria to Omega at the age the age of 14 in secret. Within days of her arrival, she was tasked with ‘cleaning up’ some of the mercenary groups that called Omega home. It didn’t take long before her own group began to refer to her as “The Cleaning Lady” – but never within earshot of the assassin. Between her weapons and CQC training, she made quick work of the mercenaries that refused to obey the one rule of Omega.

By the age of 17, Orelia T’loak had a reputation for ruthlessness and brutal efficiency. She had a small squad of mercenaries just as capable as herself in many ways – and they became the fist Aria used to crush her opposition. When Orelia was sent for you, you were already dead – your body just hadn’t caught up to the fact yet.

It was on her 26th birthday everything had changed. Sent to provide security for a delivery of what she thought was a delivery of narcotics turned out to be a Council trap. They had learned of her existence, and the highly illegal methods used to create her. And with her body-count, a danger to all ‘civilized beings’ in any system she occupied. The fight that ensued against the Spectre lead kill-squad was quick – but resulted in the death of her squad members. Not wanting to start a war between the Council and Omega, Aria armed and supplied Orelia, and then sent her into exile.

After several months on her own, and multiple assassination attempts, Orelia heard about the Triangulum Initiative, and saw it as not only a way to escape would be knives in the dark, but a possible chance to start over. She had skills that they could use, and they could give her a chance at a new life, leaving her blood-soaked past behind her.

Orelia stands at 5’9″ with a slim, athletic build. Dark blue chin length hair – the sides and back of her head shaved down to peach fuzz – revealed the three scars on the right side of her face, light red tattoos circled down from her eyebrows to her jawline on both sides of her face, but red ‘spikes’ on the right side to almost accentuate those battle scars. Another red arch tattooed on her forehead from one brow to the other, and a red stripe tattooed from her bottom lip down her chin – a nod to her Asari Commando training, the only true ‘heritage’ she believed herself to have.

She dressed simply and conservatively, when not found in her black security uniform, when she changed out of her uniform at all.

Your past doesn't define you.