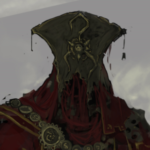 A strange but powerful warrior from a realm without light that travels the planes of reality in search for knowledge , power and wisdom.

This warrior hails from a place that few would know as Ssel Thigil , a place that could be described as a realm that the gods forgot , if only they knew how wrong they were.

No self respecting deity would go look upon Ssel Thigil , let alone go there , if they even remember what happened in the past.

Only the strong go to Ssel Thigil, whatever there reason chances are it is not good , nor the outcome, unless you are not only strong , but competent.

As the land , the things there , and the people , could consume them, figuratively anyways.

Ssel Thigil has no water, no sun , no plants , one could say there fauna is only there because of feeding on beings that still inhabit it.

Any thing that resembles a tree is instead a horrid wind swept petrified object that merely looks to be a tree.

A warrior that stands at a height of around 8 feet tall.

His posture is that of a rigid solder , His movements are deliberate and proper.

He wears a tarnished gold colored decorative helm that covers the entirety of his head, is seen to have no eye slits  , ear holes or breathing vents in the helm.

The helm is ascribed with foreign runes and odd symbols.

He wears a crimson robe with what looks to be tarnished golden trimmings , runes and other decoration , over black strips of cloth that cover all of his body with chains of  the same golden like material that all coalesce in the middle of his chest where the robes part ,  atop foreign armor.

His legs look much of the same , with crimson cloth that appear to be a type of longer tasses at the waist , black cloth covers underneath where the crimson robes do not, then the black cloth meets a set of thick black boots.

Underneath all that clothing and chains , is what appears to be a downward facing great sword of an appropriate length to his size , the tip of the blade is always hovering just above touching the ground , and is never seen to be put down.

Strange Currency from a Foreign Land

Deicide , Self-sufficient , Worship Of The Self , Fate is an Illusion , Survive or Die , Knowledge is Power , Patience is A Virtue , Meditation and Reflection are Vital , Deity Hating , Honesty , ect