Fears: Wolves & other predators to Owls, vacuums, and heights

Hot temperatures, hits to the face (since she may lose her glasses), scare tactics, and large enough birb traps

Regular: Athena stands at 5’7 and weighs 160 lbs. She’s a literal Snowy Owl, just… giant. You can tell she’s a female by the black barring in her plumage. And yes, she still needs her glasses in this form.

Cursed Image: This is her humanoid form. Yup, she has one. She still stands at 5’7, and also still weighs 160 lbs.  The weight part is probably because of her monstrously thick lower half – her body starts thickening even above her waist. Her rear, thighs, and legs all are heavily muscled, and she’s got lots of jelly as a result. This is both a blessing, and a curse in some ways. And yes, this means she has powerful kicks, jumps, and all that. She also tends to have some chub, although sometimes it’s hard to notice. 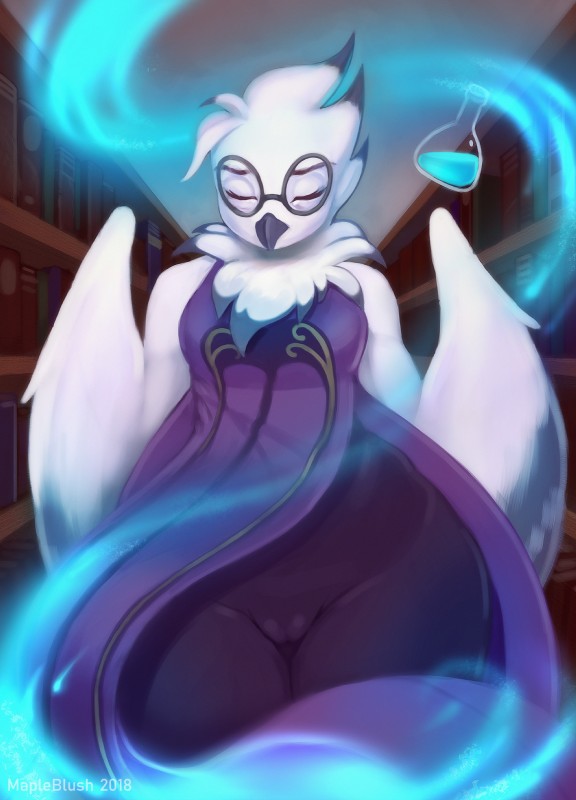 If you want more images of Athena, feel free to PM me. 🙂

Blue Energy: When excited or in a fight, Athena will have cyan, glowing energy wisping around her, like a visible aura. She may use this energy to attack others. It can act as a sort of blast to knock others away, electrocute others, burn them, overload electronics, and more. It also doubles as a shield against energy-related attacks, things like lightning, flames, and blasts of some sorts.

Telekinesis: Athena has the ability to move objects with her mind, also known as telekinesis. She has mastered this power, and therefore can move literally anything if she focuses hard enough. A planet will be incredibly difficult to move, and very exhausting, but she’ll have no problem tossing a chair around like a toy.

Striking Eyes: Athena’s amber eyes are very beautiful. One’s gaze may therefore naturally gravitate towards them. But beware – she can use her eyes to stun opponents. How she does this is not yet known, and she has never been captured for experiments to find this out. All she has to do is lock eyes on her opponent, get eye contact… and suddenly, her opponent will freeze or even fall over and stay there. If her opponent is immune to psychic effects, however, Athena will be out of luck.

Owl of Gaia: Athena is a daughter of Brad Tupolev, the Owl of Gaia. He’s the one who stopped the Void crisis, he governs an entire planet, and he’s the high priest of Gaia. He even met the Goddess herself. That’s quite the father to have.

Um… scroll up to the top.

Oh my… I haven't thought about that at this point.

Single, I guess? I mean, I don't know if I even want someone for now.

Well… it’s not as interesting as my father’s story. I was born through IVF, and the first being I ever saw was my father. Being the smartie he is, my father shared his passion for science in general with me, and I actually started to love it. Now, I’m a big nerd in science, and spend much of my time in my own little lab, doing research on my own little projects. I haven’t done too much in terms of really getting popular. I mean, when you’re the daughter of a prime minister, people know about you. But I’m a bit introverted, and prefer to spend time on my own. Just me, my data, and my lab. Recently, though, I’ve started to become fascinated by Hellifyno and its array of creatures. I’m starting to explore the planet, which is said to be the center of magic in our universe, in order to record what I see and perhaps replicate it. Who knows, I might meet you next. In that case, maybe we could be friends. 🙂

Just regular things, like my wallet, phone, keys, Gaian dagger… stuff like that. I sometimes will carry more things if I need them.

…unreachable by you. Well… unless you have a gun. In that case, don’t hurt me please. I’ll tell you one.

Blegh. Screw this question, it's obvious at this point. Science. I believe in it.