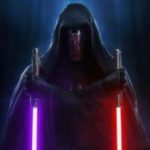 Summary: Skorge is an ex Sith Lord, His training in the light and dark side of the force made him hungry for power and silence as his need to bring order to every life in the galaxy grew more and more. He slaughtered his old masters and took control of a fleet in the middle of a raid, turning his back on his mission he sought out his own future without someone telling him what to do. Skorge is now in command of several fleets and commands a ship known as ‘ The Tomb ‘. It is uncertain what his endgame is but all he knows is death and power at this point, Following a freak accident; he had one of his arms severed and was bitten to receive a disease that would only make him stronger but hungrier… being human, Skorge has learned to adapt to fighting anything that isn’t.

Origins: Skorge was born on Coruscant under a different name that is N/A due to various reasons and causes. He lived a simple life with his father who was a commander in the imperial fleet, a decorated soldier and a living legend amongst his fleet. His fathers best friend and second in command was known as ‘Tyran’, Tyran would visit the two a lot after his retirement from the fleet and would always joke about Skorge becoming a imperial fleet commander one day. Skorge didn’t have many friends and never focused on education nor the laws of the force or his city. His father passed away on a mission when Skorge had his 14th birthday, Tyran took responsibility of Skorge or he would have been sent to a temple to take refuge with other orphans. Skorges mother is no where to be seen as she was a republic general and left Skorges father after giving life to Skorge. By the age of 21 Skorge has developed the life force of a Jedi, his powers grew but without training they seemed out of control and balance, Tyran had taken him to be trained amongst a small order of Jedi that didn’t play along with the chancellors guidelines before going on his own mission with his fleet

The Force: After Several years, Skorge has adapted to his new found purpose and powers. He was trained under several Jedi knights some of which were ex comms as they broke rules within the light sides guidelines. When his time came, Skorge was given a lightsaber and was given his first mission, he left coruscant with no interest upon his return wether he was successful or not in his imitation. The magnitude of his power was increasingly growing and strong with every year, vivid dreams and visions tormented Skorge as if it was a warning but he shook them off and wanted to focus on being a Jedi Knight.

When the time came, Skorge was approached by several dark cloaked figures, instinctively he was ready for battle but ultimately he knew somehow they were not there for a fight but an offer..

Skorge became deranged, his fight between the dark side and the light side showed physically and emotionally thus giving him his infamous blue and red eyes. He was torn.. what to do? Fight for what you know is right and trust in the light ? Or go against everything he had been trained for? A simple decision to some but to Skorge it was a matter of personal belonging. He hated training in temple amongst the ex commed Jedi, he felt he was under used and poorly observed in his actual strength. At this point Skorge after having being offered the choice to come freely to the dark side or to be sent back to Coruscant in pieces… but. No matter the choice, one of the cloaked figures was ready to lunge to attack, bravely and ferociously he fought the cloaked figured off before severing his head clean off. The other figure pulled down his cloak to reveal that he was a Sith Lord and was in need of a new apprentice seeing as he had just killed his previous on right before him.

Years past, Skorge was nearing his peak. He was the ultimate weapon at this point, trained and slaved by the dark side and their ways he grew stronger, faster and more intelligent. His mentor known as Darth Vruk, A supreme destroyer in his field; grew fascinated but feared but his apprentices new powers and ability… so he should have been. Darth Vruk met his end not too long after a galactic war in which the imperials and rebels fought endlessly over territory in their home galaxy. Vruk was struck down in his own warship by his apprentice and so Skorge was then branded a traitor by both sides of the war.. that never phased Skorge one bit as he was inspired by the adamant attention from both parties.

(This is a work in progress)

Skorge stands at 6ft 8, a rare size for a human. He has an athletic body with several scars and markings on his body. He has a robotic right arm in place of him losing it in battle. He has short dark hair with red and blue eyes. A long dark scar runs down his red eye to symbolise the pain he has endured through the dark side of his life and training.

When Skorge reaches, in any scenario; his ultimate sith form, He is seen as a darker entity. Clouds of black smoke entangled around his robes and both of his eyes would glow dark red, he would appear slightly taller and his voice would be much deeper of that of a demon. When enraged in such a form, he is more aggressive in battle and will take most if not all physical and non physical damage, his powers do not grow but he is able to use them more frequently without it damaging or disorientating him more.

Miscellaneous: a small pouch to keep trinkets that he receives from others or finds, Several needles filled with a vial that helps keep his disease at bay, A small pocket watch, Several pictures of his home planet.

Skorge is always accompanied by his warship ‘The Tomb’, when he enters a new area his warship is automatically above the areas orbit in the skies. It’s main purpose is to patrol and protect Skorge at all times, it’s slow due to its colossal size but very dangerous if provoked.

Skorge hates snow, It slows him in combat and he hates the cold.
Very soft when meeting new people but won’t hesitate to eradicate life if provoked.
Doesn’t eat nor drink despite being human.

There is no plan…