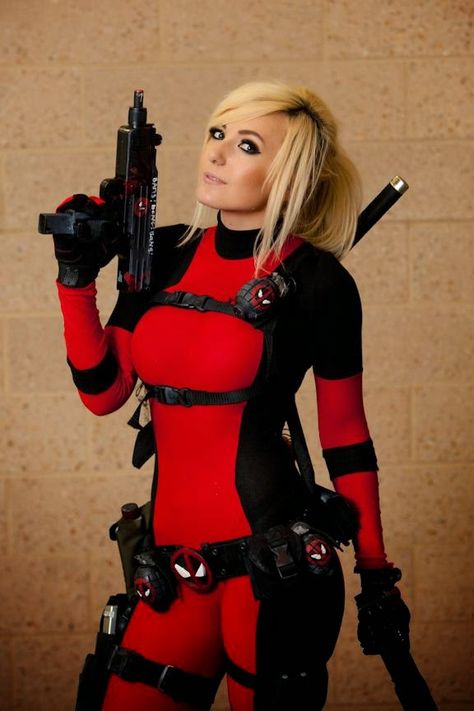 Lady D possesses a highly sarcastic and great sense of humor that irritates and annoys most of her enemies. She regularly insults and belittles his enemies to her own godly. She feels no shame and can make a joke out of any situation, . Only a few select people can withstand her seemingly never-ending inability to stop talking.She loves cartoons, potty humor, Skee-Ball, classical music, television shows, rap music, and American pop culture.

Regenerative Healing Factor: Lady Deadpool possesses a superhuman healing factor derived from that of the mutant Wolverine that allows her to regenerate damaged or destroyed bodily tissue with far greater speed and efficiency than an ordinary human. Lady Deadpool is able to heal injuries such as slashes, puncture wounds, bullet wounds, and severe burns within moments. Her healing factor is developed to the point that she can regrow missing limbs and organs.
Telepathic Immunity: The healing factor causes her brain cells to be in a constant state of flux and regeneration, rendering her immune to psychics such as Professor X and Emma Frost.
Foreign Chemical Resistance: Lady Deadpool’s body is highly resistant to most drugs and toxins. For example, it is extremely difficult, though not impossible, for her to become intoxicated. She can, however, be affected by certain drugs, such as tranquilizers, if she is exposed to a massive enough dosage.
Disease Immunity: The unique regenerative qualities of Lady Deadpool’s healing factor also extends to her Immune System, rendering her immune to the effects of all known diseases and infections.
Superhuman Stamina: Lady Deadpool’s musculature generates considerably less fatigue toxins than the muscles of an ordinary human being, granting her superhuman levels of stamina in all physical activities. She can physically exert herself at peak capacity for several days before fatigue begins to impair her.
Superhuman Agility: Lady Deadpool’s agility, balance, and bodily coordination are enhanced to levels that are beyond the natural physical limits of even the finest human athlete.
Superhuman Reflexes: Her reflexes are similarly enhanced, superior to those of even the finest human athlete.
Strength level
Lady Deadpool possesses great, though not unnatural, physical strength. However, she does have at least the strength of an Olympic level weightlifter. She is capable of lifting at least 420 lbs but no more than 800 lbs.
Weaknesses
Annoying: Wanda’s mental state has also proven to make her a very irritating person to be around. Many heroes often find themselves at wits’ end around her; this makes for poor ability to cooperate with her in team efforts.