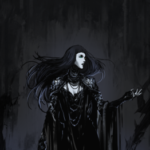 Hey! The stories are below.. Where it says Story.

All beings are single. Natalia Viel is widowed and single.

Natalia has declined telling her story.

ShiiAyra has actually just moved into a room at the Inn. Of course, now that room isn’t exactly available. The alien woman arrived at the wrong time, I suppose.

ShiiAyra was chosen as a lead-medic in the war against her race and one other. When her little brother was of age to go to war, her parents were planning to hide him.

Breaking a major law led to execution. Her brother was let off, seeing as they needed more young, boys in their army. With little experience, “Z” was killed.

Shii wasn’t told of the news until after three battles, when one of her patients broke the news. Having been a friend of the Lee family.

ShiiAyra stole an emergency life-ship, which in their race was their version of life-boats, and left behind a world she doesn’t miss. As for as she knows, her race has given up the search.

Scar has declined telling her story.

Lexus was known as the Goddess of Death where she was from. Though, she is not referred to that in Hellifyno. That title is dropped unless she is at her home-land.

Lexus was young when her mother gave birth to her little brother, Oaxo. {Oh- Ax- Oh.} Lex was constantly around him. In fact, she was very. Very, protective of him.

Her father came home, drunk. Though it was an accident, Lexus saw her fathers next action as,.. Violent.

He had tripped over the corner of the wall, and foolishly went to grab the small boy to catch his balance. This sent Ax’s frail body slamming into the floor against his fathers weight.

Lexus had murdered her father. This was when she was older. 16. She thought he had wounded the child on purpose.

The village decided on banishing the girl. She found a home on her home-land, spoken of earlier. The Island of Giija. {Gee- sh- UH.}

{Shone in the pictures, in the story box.}

All beings have denied access to us. Their secrets will remain hidden.