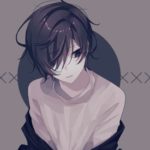 nobody. a single pringle

Mint was born in the 1900’s in a very wealthy and conservative family. Being an only child made his parents put a lot of pressure on him to be the perfect heir to his family company, that had been passed down from generation to generation. This, of course, put a strain on his relationship with his parents, especially during his teenage years. Whenever he and his parents fought he’d go running to his aunt’s house in the middle of the woods, who was cut off from the rest of the family when Mint had just celebrated his second birthday, since there were rumours that she was a witch and had ties with the underworld (Mint’s family didn’t want to be associated with that shit). Mint, being the madlad he was, couldn’t give a flying fuck, and spent most of his afternoons with her, his parents under the impression that he was at a friend’s house. Until one fateful day, a few months after he had turned 23, a fire broke out in the family mansion. His parents escaped with a few burns, but Mint didn’t have the same luck. He died with 3 degree burns almost all over the left side of his body. At his funeral, which was full of fake tears and mourning, the burns were covered with buttercups, so everyone could look at the body without having the urge to barf. The news of his death ended up travelling to his aunt, who, very saddened by his death, decided to give him another chance, but not at life. She sneaked inside the cemetery Mint was buried in and dug his coffin out. She placed an amulet around his neck and made a ritual, essentially bringing him back to “life”. He wasn’t exactly alive, nor human, per se, since his soul now was trapped inside the amulet along with a demon soul. By having a half demon soul, though, he was sent underground, where he was judged and allowed to stay, as long as he agreed to work in the Ministry of Hell as an agent, where he’d be sent on missions to persuade humans to sell their souls to damnation, and in return, give them a week of unlimited wishes.

SOME BACKGROUND INFO
-In this universe, demons aren’t allowed to be roaming freely on Earth unless they have permission from the Ministry of Hell/are an agent.
-Imagine the underworld as your normal day to day Metropolis, but with demons.
-The Ministry of Hell is kind of like a Ministry of Magic (from Harry Potter) of the underworld. Yes, there are departments dedicated to torture methods, torture scheduling and all that jazz, if you were wondering.
-To get to the Ministry of Hell, you have to take a special subway with a card that says you’re authorized to take the subway. The subway itself not only leads you to the MoH but also to the “real hell”, which is an enormous building facing the Ministry where all the tortures, purifications, etc. are performed.
(if you have any questions about it, feel free to dm me)

He’s 6’2 (187 cm). His built is average, his body type/shape a trapezoid shape, it’s left side mostly covered by multiple buttercups. He has raven short messy hair, with a fringe that slightly shadows his green eyes and a few buttercups sticking out. He’s extremely pale, with slight dark circles around his eyes, and a heart shaped face. His teeth are straight and white, although his canines are more canine than a human’s. He wears a round white mask with a single bunny ear that only covers the left side of his face, with only a black dot where his eye is supposed to be. He wears a grey turtleneck sweater under a fluffy black parka, along with combat green jeans and black winter boots. He also wears a black leather glove on his left hand. He’s also always wearing a weird black round amulet with some kind of gibberish written all over it around his neck.

ooh boy here we go
-extremely touch starved, yet tries to keep physical contact to a minimum.
-afraid to get attached to people.
-very sensible, but pretends to be a tough nut to crack.
-his real name is Lawliet (Lawllie for short)
-if you manage to (safely) reach the top of his head and pet it and run your fingers through his locks I swear to god this man will become putty in your hands like?? he has a love-hate relationship with headpets.
-cat fur. cat fur everywhere in his apartment. where does he keep the cat? where did it come from? don’t know, don’t wanna know.
-has a bit of a staring problem (won’t admit it until you catch him staring at you, still will be very stubborn. “I just HAPPENED to MAYBE be glancing in your general direction. I never stare at anyone, I’m not a fucking creep!”)
-goes to a local cat cafe every saturday at 2pm and if you find out he’ll shrivel up into himself and probably move to the other side of the globe and change his name.