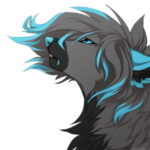 Blu was just like any other normal puppy, happy playful, living life normally. Blu had no parents to speak of, and when they were found they were found burned to death, death date around a year before finding.

Blu Axel, fell into the nearby river during hurricane season, the current was strong, he was set to die in that moment, but something inside him refused to do so. Blu stayed alive for so long he eventually reached the ocean, which was even worse for the little pup.

Eventually his body gave up, he was 23 miles away from land, then he was suddenly pulled underwater extremely fast, he was drug into a bunker underwater by the one and only, Heilig, goddess of the oceans.

She saved him, he was returned back to his foster home at 12:23 am, his fur had turned a solid black, and dark blue, and his eyes changed from blue to silver. The rest is history.

Accessories: Necklace with the charm of Heilig.

Piercings: Both right and left ears are pierced with a precious metal, small rings.

Protector of the Heilig Temple, and of the Wooded Jungle.