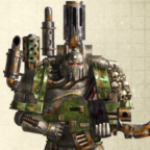 Plague Marines are those Chaos Space Marines who have wholly dedicated their lives and souls to the service of the Chaos God Nurgle. Within their corpulent and disgusting Power Armour their bodies are bloated with disease, swollen with corruption and rank with decay even as they no longer are capable of feeling pain, the greatest mutational “gift” given to them by the Plague Lord.

The first Plague Marines were warriors of the Death Guard Legion, trapped in the Warp upon their starships when the virulent Destroyer Plague struck their fleet. Mortarion and his Legion offered themselves up to the service of the Lord of Decay in return for their lives. Their bodies became bloated and swollen with the corruption festering within them, but they no longer felt the agony of the Warp-pox and did not die from its horrific symptoms.

Since then, many Heretic Astartes have dedicated themselves to Nurgle, though few achieve the vaunted ranks of the Death Guard. Those who truly wish to join this most foetid of cadres must first swear loyalty to the Primarch Mortarion — only then will Nurgle bestow upon them the corrupting ague that created the Plague Marines. Outside of the Death Guard, a favoured few Sorcerers of Nurgle know the secrets of the Plague Marines, and Abaddon of the Black Legion has won many of these spellcasters to his cause. In return for fealty and long service, these blight-mages will bestow their pestilent gifts in the Warmaster of Chaos’ name.

Regardless of allegiance, all Plague Marines have disgusting, rotted bodies that stink of decay. The putrescent slime that oozes from their many weeping sores corrodes their armour and burns their skin, but despite their horrific disfigurements, the Plague Marines are fearsome warriors indeed. Their rotting brains are inured to the agony of bodily corruption, making them all but immune to the pain or debilitation caused by the weapons of the enemy. Not for nothing are these repugnant footsoldiers considered the most resilient of all the Chaos Space Marines.

As well as fighting at the behest of the Lords of Chaos, the Plague Marines dedicate their lives to spreading corruption and decay across the galaxy. The Plague Fleets of Nurgle that periodically spew forth from the Eye of Terror are captained by the Plague Marines, spreading Father Nurgle’s Warp-spawned contagions and pestilences across the myriad star systems of the galaxy, forever spreading the death and decay that are the hallmarks of Nurgle’s kingdom. 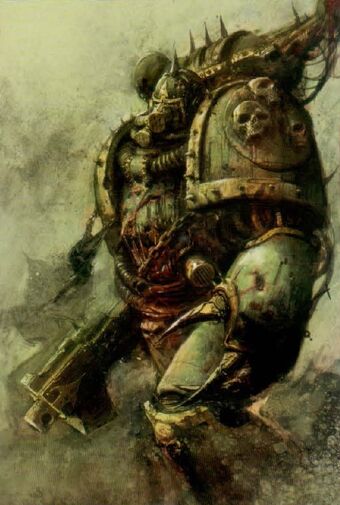 In serving our Lord..