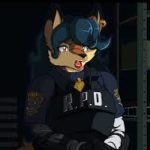 This is not how I imagined my first day.”

Carmelita’s outlook on crime is very black and white, firmly believing that any lawbreaker must be brought to justice, regardless of how minor or major the infraction was. Pursuing this vision with her shock pistol, Carmelita was extremely rigid in her view and pursued all criminals with equal determination, from murderers to jaywalkers to thieves, extending to Sly and his gang. Both she and Sly have repressed romantic feelings for each other and their relationship was portrayed rather ambiguously throughout the series until the conclusion of Sly 3: Honor Among Thieves.

Despite believing any criminal should be brought to justice, Carmelita acts justly to her captives, as evident when she offers Murray a bag of jelly beans during his captivity and ensures that he is comfortable in his makeshift cell. Carmelita is very devoted to her line of work, and must keep her emotions under control in order to keep her temper in check. Carmelita has been seen to enjoy regular day-to-day activities when off duty, such as viewing art galleries, listening to music and buying boots.[3]

Although Carmelita obsesses over trying to arrest Sly, she does harbor some respect for him and more, though she can’t really admit it to herself. She even once mentioned that it was a shame that Sly was working on the other side of the law.[4]

Due to her rigid attitude, she was left heartbroken and regretful when she realize Sly has been caring for her all along after his disappearance. Finding the picture during her date with Sly, she realizes that she didn’t give him a chance to explain himself, further lamenting herself.
Biography
Background
Carmelita is a fourth-generation member of law enforcement.[1] At a young age, she studied at Sleuth Academy and graduated at the top of her class. After graduating from the Police Academy with honors, she began working for the Investigative Services Division of INTERPOL.[2] Her boss and mentor was Inspector James Barkley. At an unknown point in her career, Carmelita became acquainted with Constable Neyla and The Contessa.

Raccoon city incident
Upon graduating from the police academy, young Carmelita Fox was assigned for Raccoon City’s Police department to enforce the local police forces, unaware about the danger she was about walk into after escaping and enduring the horrors of raccoon City she rejoined a different police force

Carmelita is a fox with brownish-orange fur, a beauty mark under her left eye, and thick, wavy blue hair with bangs tied in a braid by a gold hairband. Her outfit includes a dark blue midriff-baring top that zips in the front, form-fitting dark blue pants, and a choker from which her INTERPOL badge hangs. She wears a light brown leather jacket and yellow gloves. She wears a golden hoop piercing on the top of her left ear. Carmelita wears long dark-brown or black combat boots; though in the cutscenes for Sly Cooper and the Thievius Raccoonus and in her in-game model for the said game they are shown with steel toes with a yellow police star on each one she also wears a lightly armored raccoon police department uniform. Carmelita is shown to be an excellent combatant and very capable in a fight. She has impressive acrobatic skills, capable of matching Sly in agility and speed. She also possesses great balance, given that in her chases, she always manages to prevent herself from plummeting down near fatal landings (such as near the edges of high buildings or mountain peaks). Carmelita can also leap higher altitudes than Sly to compensate her inability to climb/spire jump/rail walk and is incredibly adept at using her shock pistol. She seems to have a great deal of lower body strength, given her jumping abilities and the fact that she’s shown delivering kicks that can send even the burliest of flashlight guards flying. She also has a strong force of will, being able to fight off the Contessa’s hypnosis (which was also being powered by the Clockwerk Eyes, increasing the Contessa’s abilities). Sly himself complimented her skills when Bentley expressed concern for her ability to go one-on-one with Muggshot, who she was able to damage (albeit only slightly) with a physical attack, something even Murray was unable to do.

In Thieves in Time, she is also able to change her ammo type from default to Auto Fire, Charge Shot, Stun Ammo and Triple Fire. Also, she is surprisingly good at belly dancing, which she reluctantly used to distract the guards while Sly, Salim and the gang opened the vault.

In upholding justice and order