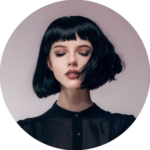 Alright, so it goes like this… a cornfield pans into view. It’s dark and cold out, the moon above is full and shining bright. Crickets chirp, frogs croak. Suddenly a puff of smoke appears, it grows quickly and suddenly a girl, no more than 15 or so, is thrust out and onto the ground. The portal quickly closes behind her before she has a chance to turn around and go back in. Her eyes are wide, watering now. The tears flow and her scream fills the air around her.
Currently

“Huh? What was that?” Imani pulled off her old school bulky head phones and glanced up at the librarian.

“You’re music. I’m going to have to ask you to turn it down or please leave the Library. You’re distrusting the others.”

Soft brown eyes widen for a moment as she scrambled to turn the volume on her phone down. “Oh shit, for real? My bad, I-”

At least Imani had the decency to look guilty as she finished shoving books, pens, and an old chromebook into her backpack. “Sorry!” With things poorly put away she made a silent dash for the front door. She had gotten a bit carried away during her research she really hadn’t realized she had turned up her music to drown out all the sound around her. Eh, oh well. She’d be back soon enough, it’s not like they’d kick her out for good. “Oh, did you hear about that poor girl they found in the cornfield? Said her parents were dead, had no one to take her in.” “Well now, Sheriff Watson did ya know, he was the only one she’d talk to.” “Poor Sheriff…” “Poor child…” They felt bad for her. Another sob story, yay.

Wasn’t like she cared or anything… or… maybe she did.

Imani sighed as she rounded a corner into a nearby alleyway. Hands slipped into the pockets of her skirt to pull out a loose cigarette and a lighter almost out of juice. Bad habit, she knew, and one she had to hide from poor old Sheriff Watson, boohoo hoo. It came in handy anyways. Sometimes. She… she really didn’t want to think about it right now. Besides, she had just gotten the damn thing to light and was taking that first inhale whe- whoop whoop! the good old sheriff had arrived.

“Imani! You better not be doin’ what I think you’re doin’!”

She flicked the cigarette away, wiggling her fingers around as she spun around with a big smile on her face. “Well I’d neveh! I-me? Sweet little old me? By the heavens I’d ne-”

“Cut the crap kid. I know what’s good in the uh… hood?” He patted the top of his steering wheel ’cause yeah, even he knew that was a bad one. “Anywaaays~ hop in, kid. I got paperwork to fill out tonight so I want you to stay in, order some pizza, do… normal teenager stuff.”

“I’d prefer you have a wild party to be honest.”

Imani gasped as she threw her bag into the back seat of the cruiser and slid in after it. “But the underage drinking!”

Bob, the good Sheriff’s first name, just rolled his eyes as he pulled away from the curb. Imani… liked Bob. She didn’t love him, she didn’t hate him, she just liked him. He didn’t push her too hard after the whole thingy and he seemed to be the only one to believe her, though he doesn’t like to talk about it too often. And he had taken her in… he had said that foster care would just make things worse for her. Plus he helped her in her case, the one of the whole portals and parents and blah blah blah. How it worked and all that fun jazz.