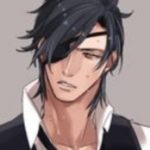 Why don't you come on over here and find out.

The adventures of the infamous mob boss from the city of GranTae, Encore C. Monstura.

A tall man dressed in a jet black suit would be standing next to a street lamp, cold breath fogging up before him. His skin was an ivory glow with a hint of mocha shade. His eyes were snake-like right down to the pupil. They were a gold that glimmered from underneath the pale light. If he were to have yawned, a showcase of razor-sharp teeth would have been on full display. A serpent styled tongue momentarily left the man’s mouth as he tasted the air around him, searching for any nearby prey. His face was handsome, dangerous, chiseled… He bore a head of raven black hair that cascaded in thick locks. A dashing monster, yes…but a monster nonetheless. His muscular body would bear the scars and bruises of his past. He wore them all with pride, yet held onto the pain. For that is what aids his strength. Remembrance of the past.

Sooner or later you’ll find out.

They wouldn’t be secrets, now would they?

Eye for an Eye, Tooth for a Tooth.