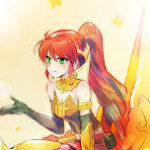 “do you believe in destiny?”

Huntress/warrior/snuggler (don't fucking tell anyone about this)

Personality
Described as the “pride of Mistral”, Pyrrha was a very professionally-capable, friendly, righteous yet relaxed and selfless person. She was a composed and collected individual who, despite being a celebrity, was modest and patient around other people, making her very sociable. Additionally, she tended to be quite formal. In addition to her impressive range of combat abilities, she was a quick thinker, knowing her limits and assessing her opponents before acting.

Pyrrha took her studies and relationships equally seriously, making her a bit stubborn and emotionally sensitive. This came from her loyalty toward her friends as well as her good intent. She was willing to keep secrets and help friends in need.

She quickly became good friends with her teammates, especially Jaune, and got along with the rest of Team RWBY, often having conversations during lunches and sharing a similar schedule during classes. However, she felt that she struggled to make friends as everyone saw her celebrity status before considering her personal self. Her limited experience with people led her to apologize even when helping them.

Pyrrha’s righteousness willed her to take risks for the greater good and always concern herself with the ethics of making decisions, such as volunteering to be the next Fall Maiden. She was willing to become the Fall Maiden despite the risks to her well-being and concerns over the scruples of the transfer process. For most of her life, Pyrrha believed she was destined to be a great Huntress, one that would protect the world, and strived for this goal no matter what she could lose. Pyrrha was selfless to a fault – one of the traits that harmed her most.

Pyrrha’s selfless nature, combined with her beliefs of carrying out her duties as a huntress made it difficult, if not outright impossible, for her to make decisions for herself out of fear of letting down those who have placed their faith in her. Regardless of the potential dangers of taking such powers through unorthodox means, she was not fazed by it as much as the idea of losing Jaune and her friends

Pyrrha wore her red hair in a waist-length ponytail, curled slightly into a loose ringlet. She also wore light-green eyeshadow around the far upper corners of her green eyes. She was tall and quite muscular compared to most of the other girls at Beacon.

As a top, she wore a brown overbust corset with a vertical strip of lighter brown in the center. Additionally, Pyrrha wore an elastic, black, A-line mini skirt and brown opera-length gloves on both arms. She wore a red ankle-length sash that wrapped around her skirt, which was later emulated by Jaune Arc.

As for accessories, there was a small circular bronze plate on her right hip opposite two pouches with both connected to a belt. The plate bore her emblem. Underneath her hair, she always wore a brown circlet adorned with a pair of small, green, teardrop-shaped emeralds on thin chains. She also sported a large bronze gorget around her neck and a bronze bracelet on the upper half of her left arm. Even when dressed in her school uniform, Pyrrha continued to wear her headpiece.

Unlike the rest of the female cast, Pyrrha wore armor. She had elaborate bronze greaves that started below her mid-thigh before continuing downwards into her boots as well as a pair of cuisses that began mid-thigh and ended slightly above her knees. She was also equipped with a bronze bracer capable of connecting with Akoúo? atop the sleeve on her left arm. Her high-heeled boots were brown with bronze trim, matching her skirt and sleeves and reaching up to mid-calf.

She wore a standard Beacon uniform with black tights underneath her skirt.

At the Beacon Dance, she wore a turtleneck sleeveless red dress with her back exposed 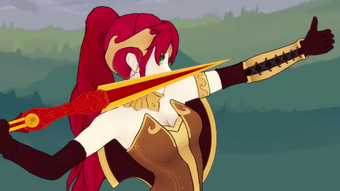 Pyrrha aiming. Note how her javelin lines up with her free arm, forming a straight line
Main article: Miló and Akoúo?

Pyrrha was able to throw the javelin form of Miló with extreme precision, being able to hit Jaune’s hood over a long distance as he was falling. It was at this point when she first demonstrates proficiency in javelin usage, as she was shown to have a perfect stance, with the javelin lining up exactly with her free hand and using her thumb as a reference point.

She was also extremely adept at using Akoúo? as an offensive weapon, a skill that was exemplified when she used her shield to sever the damaged joint of the Death Stalker’s stinger, with the shield ricocheting off of a pillar behind it and returning to her. However, this feat was likely aided by her Semblance. However, during her battle with Cinder, she was able to throw her shield with enough accuracy to strike and shatter an arrow mid-air without her Semblance, as her Aura had already been depleted.

Pyrrha also demonstrated incredible skill in switching her back and forth between weapons with quick succession, delivering rapid attacks, and being able to counter others at once, such as with Team CRDL, whom she all defeated alone, despite being outnumbered. Pyrrha was capable of using her weapon’s bladed form to even deflect bullets, as done against Hallshott. She showed to even have a high amount of skill in unarmed combat, using several kicks to knock Cardin Winchester and his team back several times, even using her hands at brief moments.

Pyrrha was physically strong, as she was seen to punch through grown tree trunks with her shield without any change in her posture or stance. However, in these sorts of instances, she may be using her control over polarity to cause the shield to move with more force. Her strength was also displayed when she used her shield as a launch platform to help Nora launch higher into the air and jumping while doing so, an action that was also done without any visible alterations to her stance when Nora utilized a grenade as propellant off the shield.

Shown in “The Emerald Forest“, Pyrrha demonstrated the ability to unlock another person’s Aura. She did this for Jaune, whose Aura had been unknown to him. She was visibly tired after unlocking it, possibly either due to the sheer amount of Aura that she commented Jaune had, or the nature of the ability itself. 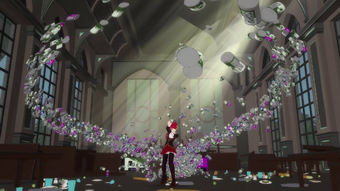 Pyrrha’s Semblance was Polarity, which allowed her to control metal via magnetism. She used this ability on her own weapons and could use it on opponent’s weapons, as well, such as when she moved Mercury Black’s boot away from her during a spar to prevent him from landing a hit on her.

In most combat situations, Pyrrha did not go out of her way to broadcast her Semblance’s abilities. Instead, she used it only to make very subtle changes of movement for her own weapons and sometimes her opponent’s weapon to affect the course of a battle. This gave her the psychological edge of appearing to be invincible in the eyes of most people.