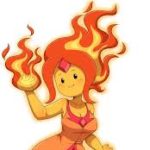 “I WILL SCORCH YOU ALIVE!!”

Flame Princess has a volatile personality; she usually has a calm demeanor, though with rather frequent tendencies to sudden and violent mood swings. She is described as “passionate” by Finn, “evil” by the Flame King, and “intense” by Pendleton Ward. The Flame King also remarks that she is difficult to control. She seems to be very sensitive and quick to judge. She is also prone to unprovoked fits of aggression, as shown when she throws fireballs at her citizens just for whispering. Flame Princess is also impressionable in a positive way. She is very happy when Finn calls her beautiful. She was also interested when Jake was giving her gifts in the episode “Incendium” and excited when her dad let her date “Prince Finn,” though this excitement quickly turns to anger when “Prince Finn” rejects her.

In the episode “Hot to the Touch,” Flame Princess shows curiosity about her new surroundings by examining flowers. This sets them on fire and she seems a bit surprised by the reaction, indicating she doesn’t know much about lands other than the Fire Kingdom. At the end of the same episode, she shows that she likes Finn, but thinks that they can’t be together because they are opposite elementals, calling Finn “a water elemental” because of the tear that she felt from him.

In “Burning Low,” she seems to be calmer and able to handle a part of her flame being doused. This is illustrated when Finn jumps into the water while his foot is on fire, but she doesn’t react. Although this may have just been a mistake that the creators of the show made.

Flame Princess has long orange-red hair about waist-length that is like fire and as such flows above her head. She has black eyes that sparkle white and yellow in the light of her fire. Physically, she is thicker than the other characters, with a wider waist and bigger arms and legs. Her skin is yellow-orange and she usually wears an orange-red dress under a light orange surcoat with hot pink trimming. At first, she does not wear shoes, though her dress usually hides her feet from view. She has two diamond-shaped, red gems; one on her forehead and the other on the front of her dress. The red gem on her dress is shown to be a part of her dress and not her body, which exemplified when Flame Princess had a different outfit on in “Ignition Point.”

When her flames are doused, her skin changes to a pinkish-gray hue and her hair falls down her back and becomes a dull shade of maroon. Once in dry conditions, she returns to her normal appearance quickly. She turns into a similar appearance when she was poisoned in “The Red Throne.” She has many different enraged and battling forms, most of which have red eyes.

Flame Princess is normally seen wearing dresses, in all different shades of red and orange with a gem on some of her outfits and her hair is seen up most of the time.

Being a fire elemental, Flame Princess is able to conjure up flames at will, transform other citizens of the Fire Kingdom into flambits, transform into a larger, more dangerous form composed purely of fire, hurl fireballs that can vary in size, and separate her body into distinctly separate groups of flames (shown when she ambushes Finn in “Hot to the Touch.”) She appears to be able to consciously extinguish fire she has created; she does this when she notices Finn crying. She can also float and move very quickly, both of which leave a trail of flames.

Her weakness is water, shown after unintentionally setting off some of Princess Bubblegum’s liquid pyrotechnics and when she puts her hand into a pond. The liquid pyrotechnics caused her to become unconscious, and touching the water in the pool caused her pain. The fires that Flame Princess makes are a part of her, and stomping on or dousing the fire hurts her, although in “Burning Low” Finn puts out a fire to his leg without harming her.

She is physically unstable. If her elemental matrix is exposed to extreme romance, she would burn through the Earth’s crust and set off a series of reactions, causing a meltdown that would burn up the planet from the inside. This reaction was started when Finn kissed her in “Burning Low,” but the crisis was averted. She can use her fingers to unleash small blasts of fire and throw disks of fire as seen in “Ignition Point.”

She can emit a continuous flamethrower from her hands, but the length of time she can sustain it is debatable. She has a Scatter Fire ability, in which she emits four, manipulatible, bolts of fire. She can also make a Flame Sword, in which she concentrates an isolated flame, extending from her arm, that is intense enough to glow blue. Immediately following that, she used a Dash ability that sent massive pieces of shrapnel from a steel door (which she had just cleaved into four pieces) in all directions, as seen in “Vault of Bones.” Also in the episode, she uses Heat Sense to sense that a tree is not made of wood. She does not leave a fire trail when she walks now, and she says she is a “42” (out of 100) at sending very weak, controlled bolts of fire. This indicates that she has gained considerable control over her abilities since “Burning Low,” as seen in “Vault of Bones.”

She has full manipulation of her body, morphing it into asymmetrical flames at will. Her father also has this ability, and it may be the norm among fire elementals.

She can use her fingers to unleash small blasts of fire and throw disks of fire as seen in “Ignition Point.” She can fire a large blast of fire, let fire come out of the ground and even turn parts of her body into a mass of fire to get taller, or extending her attacks. In “Blue Flames” Flame Princess connected with her roots and accepted who she was. Because of that she gained the power to use blue fire in combat, by Blue Flame God. She hasn’t displayed her blue flame powers, but, as said by the Blue Flame God, it mostly acts for boosting her current abilities.