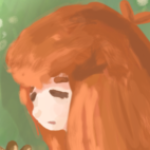 Currently lives in a small cabin in the woodlands near Consequence.

Elaena is a vampire. Other than being slightly stronger than the average person and possessing immortality, she isn’t any sort of fantastical being. In fact, she’s quite skinny and frail, looking as if the wind might be enough to blow her away. Her pale skin has an unhealthy pallor to it and she usually looks unwell. Sunlight makes her feel sick, so she always carries around an umbrella. She finds it difficult to sleep most nights, so the bags under her eyes are quite noticable.

Elaena’s been alive for several hundred years, not that it’d be easy to tell. Her clothes are a bit old-fashioned, but not noticably so, and people usually just think she’s trying to start some new trend if they do happen to notice. Her accent has slightened over the years and (despite never quite getting the hang of slang), it would be hard to notice a difference. Her eyes have an old and tragic look to them, though, as if they hold all the years she’s seen.

Elaena is an exceedingly gentle and quiet person, usually. She doesn’t want to alarm people, especially those who are able to figure out her true existence as a vampire. She’s had a long time to reflect on herself and absorb knowledge, as she has studied earnestly to pass her long years. It’s hard to make her lose her cool, as she’s become too tired and knowledgeable to bother with hot flames of anger, but it is possible. Elaena does tend to be pretty timid though, not one to approach others or seek anything from them. It’s as if she feels the need to apologize for her thirst for blood by avoiding contact unless necessary. Her desire to atone for her past sins has inspired her to pursue a career in the medical field, as she can control her hunger even around open wounds. Abhoring violence, she only drinks blood received in donations, such as in blood packs. She’s lived through the violent vampiric youth years (she doesn’t like to talk about back then.) It already haunts her enough. Elaena wants to heal people instead of hurt them, a promise she made to an old friend whom she misses dearly. Elaena is a vampire. She doesn’t usually broadcast that, so it could be considered a secret. Her right arm is a metal prosthetic from a “childhood” accident. Even though she looks to be in her early 20s, Elaena is immortal, and is in fact around 200 years old. She can still be killed, she just doesn’t age.