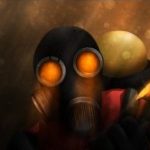 Fire..and anyone who loves me dearly

Only two things are known for sure about the mysterious Pyro: he sets things on fire and he doesn’t speak. In fact, only the part about setting things on fire is undisputed. Some believe his occasional rasping wheeze may be an attempt to communicate through a mouth obstructed by a filter and attached to lungs ravaged by constant exposure to his asbestos-lined suit. Either way, he’s a fearsome, inscrutable, on-fire Frankenstein of a man. If he even is a man….

A average size man in a fireproof red suit and gas mask with a oxygen tank and black rubber gloves and combat boots..

He loves to burn stuff