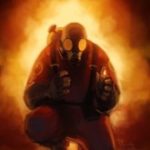 “I fear no man but that..thing..it scares me”
-Heavy

A pyromaniac/ animal and fire lover

Fire…or anyone who loves me dearly..

Bio
Name: Unknown
Location of origin: Unknown (probably hell)
Job: Pyrotechnics
Motto: “Mmph mmmph mph-mph mmph mmmmph!”
Description: Only two things are known for sure about the mysterious Pyro: he sets things on fire and he doesn’t speak. In fact, only the part about setting things on fire is undisputed. Some believe his occasional rasping wheeze may be an attempt to communicate through a mouth obstructed by a filter and attached to lungs ravaged by constant exposure to his asbestos-lined suit. Either way, he’s a fearsome, inscrutable, on-fire Frankenstein of a man. If he even is a man. 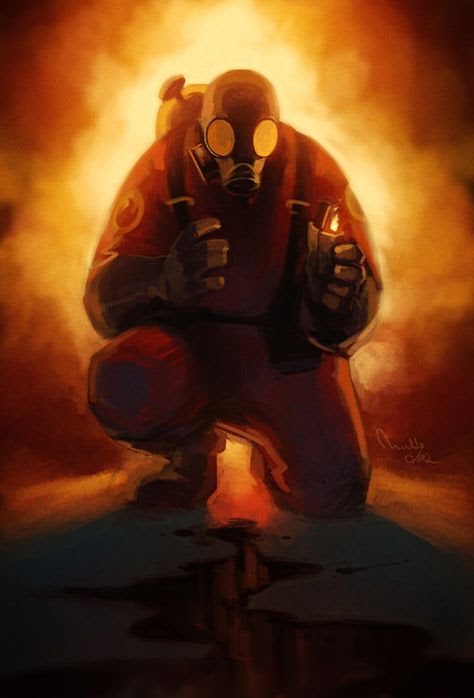 The Dragon’s Fury is a primary weapon for the Pyro. It is a black-and-team-colored flamethrower with a large, wide barrel, a cylindrical gas tank, and pneumatic tubing on the side. A visible pressure gauge is built into the side of the weapon; the gauge’s meter is affected by firing the weapon or using a compression blast.

Acting as a single-shot, projectile-based Flamethrower, the Dragon’s Fury carries 40 “rounds” instead of the 200 fuel carried by the Pyro’s other primary weapons

It is an obsidian axe with glowing lava flowing along the blade’s extreme edges.

This weapon deals 20% less damage than the standard Fire Axe, but ignites enemies upon contact. The afterburn applied to affected enemies lasts for up to 7.5 seconds.

It is a Flare Gun with a modified elongated barrel attached, an extra curved sight, and helical paint designs on the chamber. Tape appears to be holding the gun together.

This weapon fires unique firework “flare” projectiles which, upon contact with an enemy, will deal slight damage as well as set them alight. The flare, when compared with the Flare Gun, deals 25% less damage and will only deal mini-crit damage against lit opponents

The Thermal Thruster is a secondary weapon for the Pyro. It is a team-colored, metallic jetpack with two rocket thrusters, one on each side (with the right thruster bearing the Pyro’s emblem), and an enclosed yellow light on the top. When switching to the weapon, the backpack’s thrusters fold outwards, exposing two handles which the Pyro holds in each hand. Switching away causes the thrusters and handles to fold inwards into the backpack.

The Thermal Thruster functions as a mobility tool, which stores two jetpack charges.

He’s a mystery wrapped in secrets… and flames and ash..