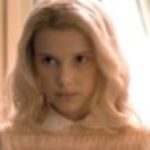 I was born in a hospital, I was then taken from my mom and put into a room with my soon to be sister. My mom got told that she never gave birth to me and that she miss carried. She knew that she gave birth to me , but on one would listen. So one day she walked in and went to the room and saw me , she got close to me then the doctor’s took her away, they gave her an electrical lobotomy. Wich messed up her mind. Momma has powers just like me!. A few years later, papa is testing me in the lab , he makes me see into my mind, and crush cans with my powers  . Untill one day , I was in the tub when I saw something, I got out of the trance and screamed for Papa, he wouldn’t come get me . I would soon later learn that I had opened a gate to another world, that world is called the upside down. I was running away from papa. I saw a shelter, so I went in. The man gave me food and called someone, he was shot and papa tried to get me . I ran away into the forest. When I heard someone say something, I tried getting away but they saw me , they took me to the basement and I stayed there . Then I defeated the Demagorgan and went away for awhile. I met mike again after 353 days . I closed the gate and became sheriff hoppers daughter, and I went to the snowball with Mike. Now I sit home and eat eggos

I can do anything