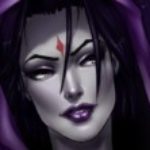 Raven was created by Marv Wolfman and George Pérez, first appearing as part of the Teen Titans in DC Comics Presents Vol 1. However, in the rebooted Prime Earth continuity her first appearance as part of the DC Universe is in Dan DiDio and Brent Anderson’s New 52 Phantom Stranger series.

Raven was born of the demon Trigon, a demonic entity who had conquered many worlds and fathered many sons. Raven was his first and only daughter. Trigon murdered the women who birthed his sons, however he allowed Raven’s mother Arella to live, believing that Raven needed to be raised by a human in order to help her reshape the under-realms in his image. Afraid of what Trigon had in store for her daughter, Raven’s mother took her daughter and fled to the dimension of Azarath, which was beyond Trigon’s reach. Over time, the monks of that realm trained Raven to control her powers and overcome her father’s influence. When Trigon finally found her again, Raven fled from Azarath to Earth in order to protect her mother and teachers. Eventually she was found by the immortal Phantom Stranger on Trigon’s behalf. When she returned to Trigon’s realm time itself flowed differently, and it was revealed that Trigon was impressed by her natural abilities, allowing her to have free will and shape her own destiny. He gave her a seat at his throne.

Raven returned to Earth to interfere with the fight between Trigon and the Teen Titans. She recruited Beast Boy, who had been left for dead in the rubble of an unknown facility. There Raven used her empathy powers to mind-control Beast Boy, making him her thrall. With Beast Boy in tow, Raven teleported to the middle of a battle between the Teen Titans and the psychic villain Psimon. Using Beast Boy she was able to knock out Psimon and cause his defeat. Meanwhile Trigon’s three sons, Belial, Ruskoff, and Suge, assaulted the Teen Titans in an attempt to take Raven back. Raven, Beast Boy, and the Titans defeated them, but Trigon himself appeared again and took control of the Titans save for Raven, Beast Boy, and Red Robin. When the manipulated Titans attacked, Raven had Beast Boy distract them and Trigon long enough for Red Robin to cut through Trigon’s eyes with his wings on his costume. Trigon, pulling out the wings from his eyes, complimented Red Robin before suddenly disappearing. Soon after, a woman and a group of suited men came through a portal, informing everyone that they would take Psimon into custody and make the incident appear as if it had never happened. When questioned about the police officers Psimon had killed, the woman revealed it had been a hallucination by Trigon, so therefore it had never happened. Raven and Beast Boy were re-accepted into the Teen Titans. While apart of the team Raven made things awkward for them by revealing all the relationships Red Robin had when under Trigon’s control. Raven went into her room, leaving the awkward situation behind. There, she summoned her father, saying, “Father, I am one of them. Your plan worked perfectly,” leaving questions on what side she was really playing for. Meanwhile, Red Robin called Raven aside, telling her that if something happened to him, the team would look to her to lead them.

When all of Earth’s greatest heroes were gone and the Crime Syndicate of America had taken over the world, the Teen Titans attempted to challenge the Crime Syndicate. However, they were easily overpowered by Johnny Quick and Atomica and were then flung into the time stream. While the Titans were constantly flung through time, Raven was sent a few thousand years back in time. There, she was challenged by Etrigan the Demon, who recognized her as Trigon’s daughter and tried to kill her. Raven was saved by Wonder Girl, who suggested that the way to stop Raven’s powers, since she was born and raised in a world between worlds, was to manipulate the energy within the time stream. Raven succeeded in anchoring the Titans with her soul-self, teleporting them through time. The Titans arrived 20 years into the future, where Jonathan Lane Kent had massacred most of Earth’s superheroes, leaving only a few, including Beast Boy, now calling himself Beast Man, and Rose Wilson. Kon-El and Jon battled, and Kon triumphed. Kon was then sent elsewhere by an unknown power, and a severely injured Jon was swapped unknowingly as Superboy by Beast Boy and Rose Wilson.

While traveling through time Raven and the Titans arrived to the 30th century, where they found out that their teammate Kid Flash was actually a rebel leader and war criminal, named Bar Torr. It was during this time that Raven deduced that the Superboy with them was actually Jon, and she helped send him back to the present time so that he could find a cure for his deteriorating body condition. After leaving Kid Flash and Solstice in the future, Raven and the others returned to their original time where she discovered that her connection with Trigon had been severed.

Following an attack by the villain Grimm, the Titans planned a final attack on Harvest’s new colony. Raven was reluctant to join because of her past actions, but after Bunker told her that everybody deserved a second chance, Raven changed her mind. In the colony, the Teen Titans were surprised to find that everyone is returned to normal, and even the victims of the Culling had been restored to life. Raven played a crucial role by finding out Harvest’s scheme to extract all the metagenes to create a massive DNA strand for his usage. Raven destroyed it using her soul-self, leaving Harvest to finally be defeated.

After the Titans separated, Raven found out that her mother had a sister living in San Francisco. She decided to visit her aunt so that she could learn more about her mother’s side of the family. Raven was surprised to discover that her Aunt Alice and her family are dedicated Christians. During her stay, Raven attended Madison High School where she cast a spell on several students, in order to have a group of friends and fit in. She soon came across one student that was seemingly under the control of a mysterious white orb which had begun to grow near a carnival. The orb fed on the souls of the young, and Raven did her best to try and stop it. After several attempts, she failed, until her aunt and the citizens of San Francisco gave her the strength that she needed to defeat the orb and wipe everyone’s memories of the event.

Some time after leaving the Teen Titans, Raven set out to learn more about her family and her father Trigon. During this time she lived in a museum, until one day she found herself knocked unconscious. When Raven came to, she found herself in an unknown location alongside several other young superheroes including her former teammate Beast Boy, the new Kid Flash, and Starfire. The identity of her captor was revealed to be Robin who explained that he had kidnapped them in order to recruit them to his new Teen Titans team. He went on to explain that he needed each of their unique skills in order to take down his grandfather Ra’s al Ghul and the League of Assassins.

Unique Physiology: As the daughter of a demon, Raven has a host of unique abilities.[1]
Astral Projection: Through the use of her Soul-Self, Raven can project her consciousness for therapeutic purposes (to aid in her own meditation, or to help calm an agitated ally), or for offensive attacks, rendering her enemies unconscious.
Soul-Self: Raven can manifest her “Soul-Self” through astral projection. It normally takes the form of either her human shape or a giant raven.
Psychokinesis: Using her Soul-Self, Raven can telekinetically manipulate, arrange and alter matter and energy at the atomic level.[1]
Flight: Raven can levitate off the ground and fly, without visible projection of her dark energy as is shown when she utilizes telekinesis.
Chronokinesis: Using her Soul-Self in conjunction with her demonic abilities she can force herself through the time-stream and even bring passengers.[2]
Intangibility: Using her dark powers and abilities, she melts into walls and floors, sometimes in the form of a giant black raven (which is the form her Soul-Self usually takes on).
Teleportation: Raven can convert her physical body into her Soul-Self and carry or teleport herself and others across vast distances.[1]
Empathy: Raven can sense the feelings of others with no filter. She constantly feels all the emotions of others and must learn to control them or they will overwhelm her.[1]
Emotion Negation: She can also use her empathic abilities to steal emotions from others, rendering them emotionally “numb”.
Empathic Healing: She can absorb the pain of others into her own body in order to rapidly heal others from any physical injuries, as well as heal herself by going into a trance of emotional calm.
Empathic Precognition: She can receive precognitive flashes of the future when exposed to extreme emotion.
Psychic Link: By using her empathic-based powers, Raven can enter another person’s mind allowing her to see, feel and hear what they encounter.
Darkness Manipulation: Raven can generate darkness from herself and project it forward to attack her enemies. This darkness normally takes the form of a giant raven.[1]
Psionics: Raven is able to read thoughts, project and broadcast her own thoughts, as well as scan and alter the memories of others.[1]
Magic: Due to her demonic and mystical heritage, Raven can generate and control magical and mystical forces at will.