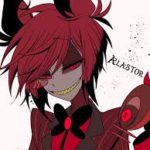 Alastor’s behavior, mannerisms, and even his voice are similar to an old-fashioned radio announcer; for instance, when he refers to modern television as a “picture show” and refers to Charlie as “charming demon belle”. Alastor deviates from the crass nature prominent in Hell in favor of an amiable persona. Thus, he is always smiling and acts politely. He never stops smiling because he believes it shows power and dominance. If a rival were to frown, he would see them as weak.[4]

He is narcissistic, not seeing many people quite up to his level. However, that does not make him reckless. Despite being extremely powerful, Alastor is fully aware that there are other demons and entities that rival him in terms of power, such as the Overlords. For this reason, he is wary around such demons, as they could potentially harm him if he is not careful.[5]

Alastor also seems to have a moral compass against the sexual and begraddled society of Hell, which is actually “not normal”. However, he has been noted to be quite sadistic and to have masochistic tendencies, rumored to be cannibalistic and devouring lesser demons. Despite this, he genuinely wants to help Charlie run the Happy Hotel, albeit for his own amusement rather than idealism. Alastor even dismisses the idea that redemption is possible. Nevertheless, he still provides the hotel a staff, and protects Charlie’s business from outside threats.

Alastor is about the same height as Vox, with the two of them standing at 7″. He is quite slim, morbid has grey skin, and sharp yellow teeth. He sports a short red angled bob cut with black cowlicks extending from the top of his head, resembling deer ears, and two small black antlers which can grow in his demonic form.

His eyes, have red scleras, bright red irises, black pupils (which can change into radio dials when in his demon form), and wears a black oval-shaped monocle over his right eye.

Alastor wears a dark red pinstriped coat which is slightly ragged along the bottom, a bright red dress shirt with a black cross on the chest underneath and long burgundy dress pants with matching bright red cuffs.

He is also dressed in a red-knotted bowtie, burgundy gloves, and black pointed-toe boots with red deer hoofprints emblazoned on the soles. Alastor also carries a thin cane with a sentient vintage style microphone attached to it which he uses to play sound effects and broadcast his voice.

CAUSE OF DEATH
Dog-related incident

In That the show must go on! THAT'S ALL FOLKS!! HAHAHAHA!